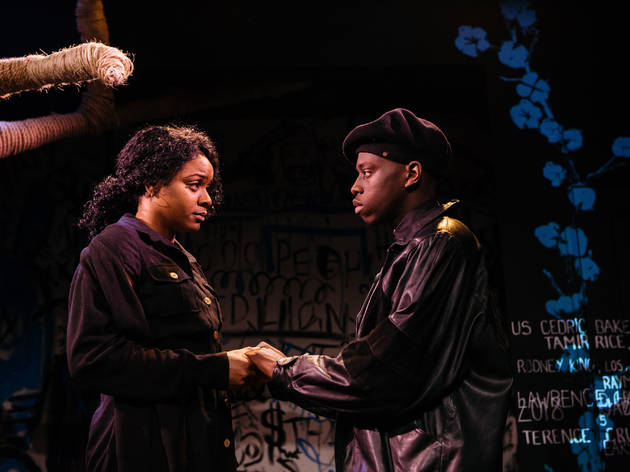 Ruffrino is a revolutionary. With a rucksack full of equipment and signs, he’s ready to wake up the sleeping masses to the plight of black people in America.

The only things in his way are that he’s 14 years old, and his mum has worked out what he’s up to. She and Ruffrino’s grandfather take a dim view of his activism; they believe that change will never happen and black people need to lie low and stay out of trouble. They also worry about having enough money to pay the electric bill – revolutions can’t happen in the dark.

America’s systemic racial inequality is reflected with care and nuance in the intimate, domestic world of Terrance Arvelle Chisholm’s kitchen sink drama. Attitudes towards political action are questioned in parallel to the history of black people in America, social class and familial conflict. Bold characters, raw dialogue and inevitable tragedy unapologetically justify relentless anger, but the script looks at racial relationships from several angles instead of a generalised, propagandist view. It’s also unexpectedly funny and charming. The tension is unrelenting, but whilst it may occasionally feel heightened the script never feels like it is unrealistic in its depictions and effectively captures the internal conflict of a population.

Louise Rhoades-Brown’s video projections marry with Amy Mae’s lighting to capture the slave legacy of black America and the escapist youth culture of Ruffrino’s video games. Delicately creeping cotton plants juxtapose desolate, urban dystopias ridden with violence – a canny metaphor for the polarisation of America’s socio-political landscape. It’s also used to simply stunning effect. Designer Jemima Robinson pays tribute to the hundreds of black Americans killed by police in a blurred, matter-of-fact stripe across the set. It demands these people are not forgotten.

Michael Ajao’s Ruffrino is switchblade sharp, a great contrast to his affable grandfather Michael (Trevor A Toussaint) and sacrificial mum, endowed with care and love by Kiza Deen. Roy Alexander Weise’s direction is subtle but not indulgent; he gives each moment time to breathe and resonate without feeling heavy.

This is an exemplary play that both honours the memories of those murdered by the state without repercussions, and presents the issues at hand with a care that respects their complexity. Though Ruffrino’s rage is one of the production’s most obvious features, what lingers is the quiet resignation of an oppressed people.