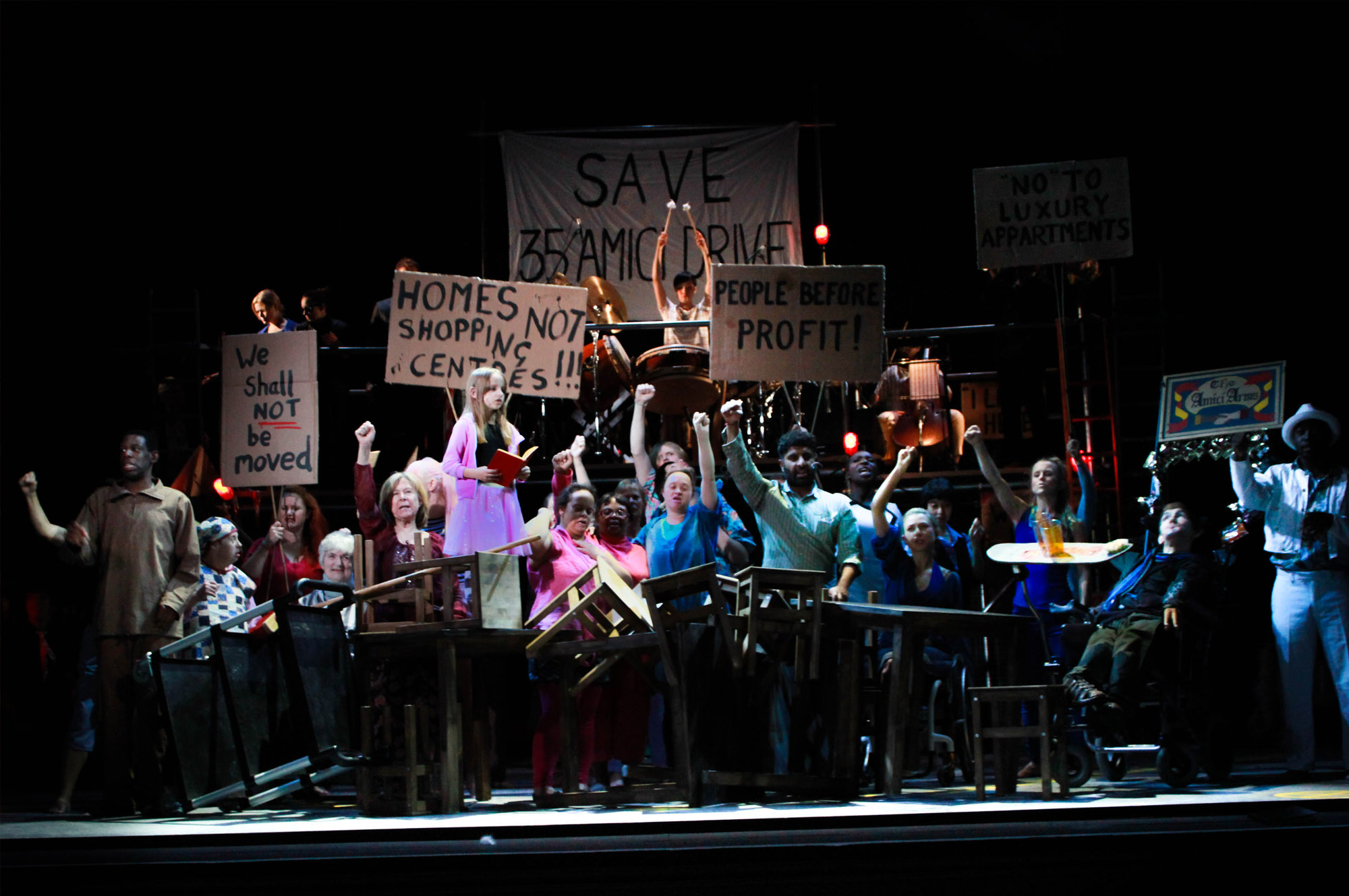 Council block 35 Amici Drive and the pub attached to it are earmarked for demolition. Luxury flats and commercial retail units will replace it, and plans to rehouse current residents are vague. Money-grubbing developers and local counsellors push for “positive change” but those who live there are having none of it.

In Amici Dance Theatre Company’s revival of their 2015 show, over fifty performers – professional and amateur, disabled and non-disabled, child, adult and OAP – come together to capture the mood of a down-trodden working class continuously exploited and discarded by those with money and power. Unashamedly clear in its agenda, the company’s devised work is lacking in sophistication and structure but reflects the diversity and heart in urban British communities.

The cast devised the piece with support from an external director (Michael Vale) and choreographer (Wolfgang Stange), but there’s a pronounced lack of consistent dramaturgy. A loose throughline of a resident speaking to his MP about the people in the building this isn’t substantial enough to hold the piece together. In between these phonecall fragments is a parade of characters that provides some plot advancement, but it takes a mostly biographical tone. Whilst the diversity is commendable, these lengthy sequences say little about the show’s anti-gentrification message. Conflict and confrontation to happen, but these moments are too brief. The property developers and politicians are painted as pantomime baddies and mocked rather than fostering meaningful dialogue through in-depth characterisation.

It’s unfair to comment on the actors what with some being clearly non-professional or having learning difficulties, but it is certainly heartening to see professionals along side those who do it for love. The choreography and structure are simple in order to cater to all abilities, or overly crowded what with the large number of performers. There are live musicians, but recorded sound is also used – an odd, distracting choice.

The show may be a simple line drawing lacking in a sturdy narrative structure, but the work the company does is clearly important and the ambitious scale is impressive. Allowing people from all walks of life to create work that represents them and put it on stage for public consumption undoubtedly has value, even if the artistic skills on show takes a different shape from what is normally seen on professional stages.