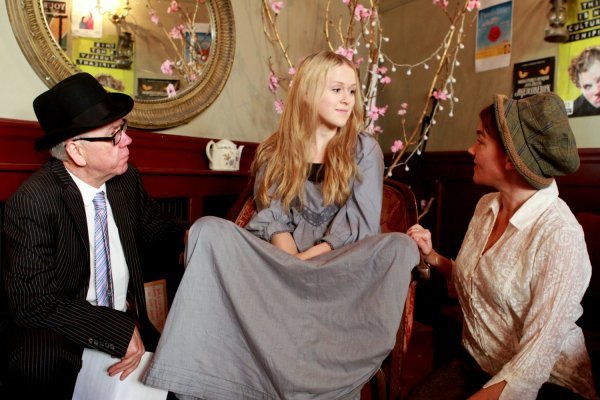 What with growing up outside of the UK, my knowledge of British history is quite patchy. I can tell you a lot about the late Elizabethan and early Jacobean eras when Shakespeare was alive, but outside of these time periods, I know little. I quite like social history, so learning about new-to-me historical figures through theatre is an event of joyous discovery. What with my leftie sentiments currently battered, encountering someone from the past committed to social justice and equality adds to the excitement even if the play has its shortcomings.

Alison Mead’s Politic Man chronicles the lives of Alfred and Ada Salter, an activist and political couple living and working in the Bermondsey slums of the early 1900s – I’d never encounrtered these remarkable people before. Avowed socialists committed to improving the lives of the city’s poor, Alfred moved from medicine into politics so he could help more people. The play pays tribute to them in documentary style, with heavy use of narration and playing in venues not normally used for theatres. Though the form is overly simplistic and there’s some stilted dialogue, the play is a strong example of community theatre.

That’s not to say the performances are amateur, though. Mike Ahern and Kerry Skinner are the committed, passionate Dr and Mrs Salter and have impressive CVs between them. They are supported by three versatile multi-rollers, forming a seamless ensemble of effective storytelling. There are moments where the overly formal dialogue sticks in their throats, but they manage to find truth despite the chewy language.

Though unsurprising due to the nature of the venues, the tech lets down the show. The co-operative pub in Peckham where I see it doesn’t have the facility for lighting changes, or a backstage. Basic projections indicate time and place which, whilst helpful, are a hodgepodge of photographs with no consistent style. Some are modern and colour, some are historical black and white. There’s a lovely feel of old school travelling players that is certainly delightful, though.

Starting in 1910 and ending after WWII, Politic Man is as much of a tribute to this couple and their relationship’s weathering of life’s ups and downs as it is to their fight for equality. Though there is too much narration and a little depth to the story due to the amount of time it covers, the production has a lovely grassroots spirit that’s a pleasure to see in fringe and touring theatre.