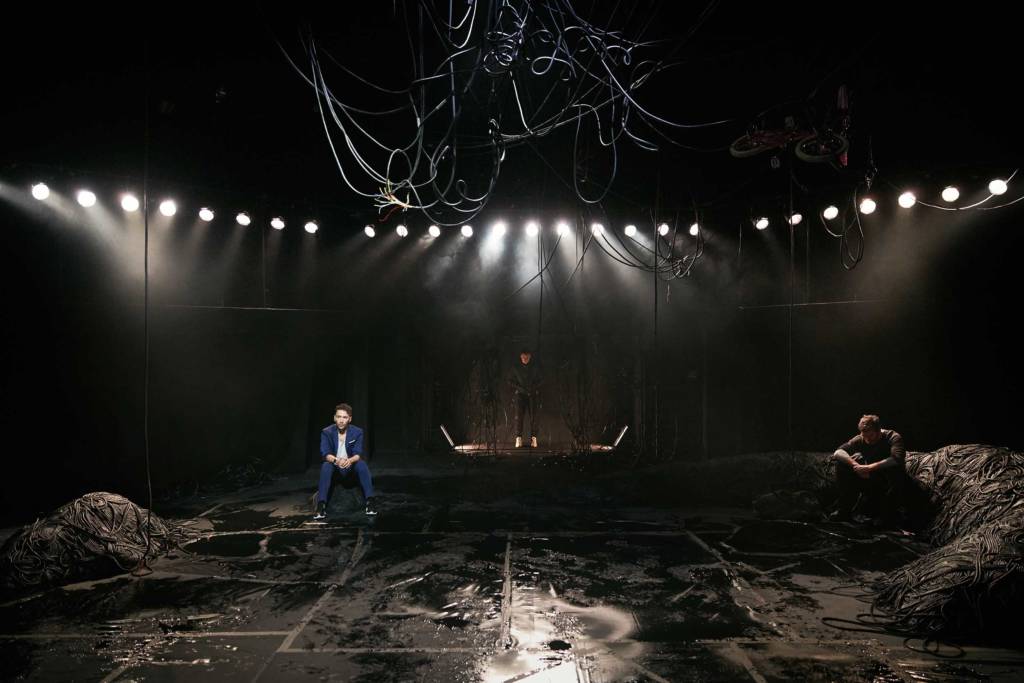 I have a fairly robust constitution and am not particularly squeamish, but Gary Owen’s latest had me trying not to be sick on Meg Vaughan’s bag on my right, or the empty seats to my left and in front of me. They were empty because some people walked out in the first half, and others didn’t return after the interval. That’s not to say Killology isn’t brilliant – it absolutely is. But the brutal story about fractured father/son relationships, toxic masculinity and revenge is bloody hard to watch.

Sion Daniel Young is Davey, a fifteen-year-old tearaway who roams the streets looking for trouble. A traumatic incident several years before, severe poverty and a well-intentioned but clueless mum means he channels his anger into violent bullying. He’s the worst sort of street kid. His father Alan (Sean Gleeson) is largely absent from his life and has no idea how his son behaves.

Unconnected to this family, Paul (Richard Mylan) is the super-rich CEO of a video game company. He is currently riding on the success of his latest game Killology, where players gain points for sustained, creative methods of torture before the kill. He believes the game is a moral experience – players most face their consequences and lose points if they look away from the hyper-real graphics. When the game eventually influences young minds in real life, it results in a cycle of tragedy and revenge.

Owen’s script uses a simple structure – lengthy narrative monologues alternate and twist around each other. The share each characters’ experiences and justify their choices – but he breaks from the speeches towards the end. An alternative ending is proposed, and direct dialogue makes the story as told so far become all the more alive and in the present. Owen uses language to powerful effect; it’s frank rather than flowery, and totally honest. We see none of the violence that is talked about, but we don’t need to – our minds more than make up for it.

The performances are exceptional, particularly Young. He shows Davey’s development from a sweet preteen to a vicious young adult, then a man quietly dedicated to caring for others. His use of posture and voice to distinguish the character is subtle and skilful, and heartbreaking within the story’s context. Gleeson’s transition from brusk, working class loner to grieving and vengeful father haunted by the memories of his infant son is as moving as Young’s performance. Mylan makes a smarmy villain that’s capitalism personified – he believes that literally everything can be bought and sold. He has a few moments of vulnerability and his fraught relationship with his father explains a lot, but he’s a great foil to the others and a figure on which to conveniently place blame.

Killology visits the debate on how violent video games should be dealt with and how much they influence young people. (Numerous studies have been conducted in recent years with varying results, though so far nothing has indicated direct causal effect.) The show certainly pins blame on capitalism and a society that can’t look after its most vulnerable; both Davey and Alan are very much drawn as victims.

Owen doesn’t shy away from graphic depictions of violence, with children and animals (the most vulnerable creatures in our Western view of the world) harmed by deliberate acts of cruelty. The story is a horrible one to endure, but it undoubtedly holds a mirror up to nature and forces us to take in the darkest, most horrible things a human being can inflict on another.