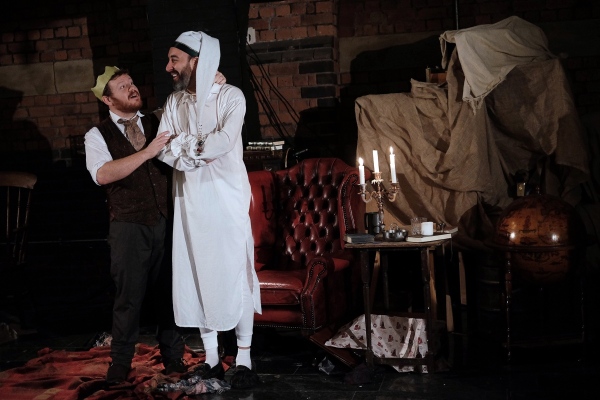 There are several versions of Dickens’ classic story on stage at the moment including two at the same venue, but I’m pretty sure that Flanagan Collective’s is the only one that involves a a two-course Christmas dinner. Traditional dinner theatre may be dreadfully out of fashion, and deservedly so – pun laden, thinly plotted murder mysteries performed by third rate actors in fading rural hotels are torturous affairs – but this A Christmas Carol is cleverly constructed, interactive and wonderfully fun.

Upstairs at the Arts is transformed into Scrooge’s parlour, with a banquet table in the middle. There are some lovely details – the corner bar is bedecked with holly, a pub sign and frosted windows, walls are now book cases and a record of debts. Though the script diverges quite a long way from the book, the fundamental story is still there and the audience is fully included. There are some moments of excessive banter and waffling, and a few vague transitions, but this adaptation is generally clear and concise. The focus is much more on the show than the food – something that makes this very different from typical dinner theatre.

Marley and Scrooge are the only performers, with Marley guiding Scrooge on a narrative journey through his three ghosts rather than physically taking him to other worlds. A distinct change of tone leads Scrooge through the memories of his past that are described with a committed delivery of the imagery-laden text. The extended interval where the audience eats and plays games is the congenial, warm Ghost of Christmas Present, then concludes with the somber telling of Christmases yet to come if Scrooge doesn’t change his ways – which we all know he does. There are some naff devices that try to cover up the lack of other characters, like a torch following an invisible Bob Cratchett.

The performances are heightened, high energy and skilful. It is impossible to not be swept away with the joy and Christmas spirit that runs through this cautionary tale. There are Christmas carols and games, but the story is the crux of this event. Though some may view this production as common and frivolous, it has wide appeal and unites audiences rather than alienates with high art. And the food is delicious.

A Christmas Carol runs through 31 December.