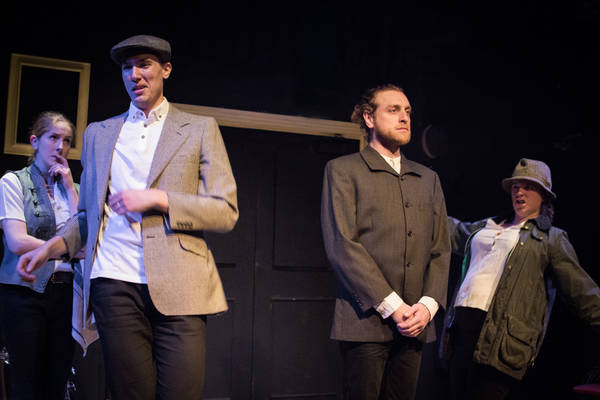 Fringe Shakespeare can be terrible, brilliant and everything in between those two ends of the spectrum. The better productions are vivacious and effortlessly handle Shakespeare’s language whether or not they are updated to a more modern setting, edited heavily or otherwise adapted with a concept. Thick as Thieves’ Twelfth Night is one of these good ones. Four versatile actors play all the parts in this bouncy interpretation that incorporates onstage character changes, plenty of music and audience interaction, and some clever character interpretations. At two hours long with an interval, the text doesn’t feel butchered though the interval isn’t particularly needed. With few faults, this is one of the best Twelfth Nights of recent fringe Shakespeare productions.

Company co-founder Nicky Diss, in an act of insightful  casting, plays Viola and Toby Belch. Her Viola is intense and boyish; her Belch is a gruff, posh older man. Diss’ presence and versatility are things of wonder, but she doesn’t outshine the rest of the cast. Her fellow co-founder Thomas Judd gives a Sir Andrew Aguecheek that is hapless and posh, a delightful interpretation that works very well; he doubles as a townie Orsino. Completing the quad are Oliver Lavery, particularly excelling as a hippy Feste and slimy Malvolio, and Madeliene MacMahon as a wonderfully frivolous Olivia. The four are all exceedingly good at creating clear, contrasting characters and have an energy that goes well beyond the walls of the tiny Hope Theatre.

There no set to speak of, which is fine for this play that changes location every scene. Costume pieces and musical instruments pepper the walls instead, giving easy access for changes. Hats, jackets and waistcoats over a uniform of black trousers and white shirts assist with character differentiation. It’s a simple but effective device to give visual variation and the lack of set reflects original practice. Occasional fiddly changes distract from the action on stage, but these moments are rare.

Some interesting alterations occur to facilitate the four actors, particularly the Sir Topas/Malvolio scene. Rather than Feste duping the prisoner, the lines are split between Sir Andrew, Toby and Maria. It’s believable enough despite vocal differences and makes no difference to the story.

Of the fringe Shakespeare that’s playing at the moment, the performances make this shoestring Twelfth Night a great one. Thick As Thieves are a talented, instinctual bunch certainly worth watching.