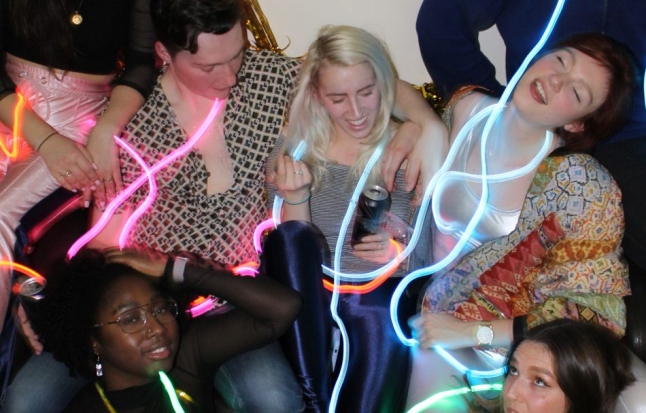 From shows like Skins, to films such as Superbad and even Booksmart, we’re taught to revere house parties as seminal events. They should aspire to levels of legendary that provide anecdotes that echo down the school halls for years to come, turning from legend to myth. If you happen to have been to a house party in Britain as a teenager, you will know that this is not the reality.

Developed by the cast, creative team, and with young people, Superman dives headfirst into the often-murky subject of sexual consent and early sexual experiences. Recorded interviews layered on top of a chaotic party soundscapes (think beer cans spraying open, a couple kissing in the corner and – of course – someone throwing up in the bathroom) set the stage, and send us straight back to those heady Friday nights where we are introduced to a hoard of students, each with their own voice and story to tell. Witty and vulgar ukulele duets from testosterone and Becks-fuelled lads have us laughing along, cringing as they detail how to work out each potential sexual conquest’s suitability – ‘boys will be boys’.

Away from the Malibu and Coke Bravado of the gathering downstairs, a young girl is raped in the bathroom. The sharp and beautifully written spoken word articulates the shame she feels, how she has been silenced, and the weight that bears down on her chest. The power of experimental gig-theatre lies in each character having complete autonomy over the way in which they communicate their experience to the audience, even if they don’t have control of the things that happen to them.

The ensemble that Camille Kooyisal has expertly choreographed and directed handles the difficult subject matter with the respect and sensitivity it deserves. Each of the cast give standout performances, showcasing their multi-disciplinary skills with ease and flare. Rose Eye have created a diverse piece of work that spans a multitude of different experiences in a way that wouldn’t have been so easily communicated through a traditional narrative form.

A poor education leaves teenagers and young adults dealing with traumatic behaviour and situations they haven’t been equipped to deal with, and this is something that needs to be addressed – not just by companies such as Rose Eye, but by the government and in schools. By the end of the piece, the night is over and we are left with the realisation that the only tales to re-tell on Monday morning are the secrets they don’t have the words to articulate, the encounters that leave a sour taste in their mouths like a hangover.