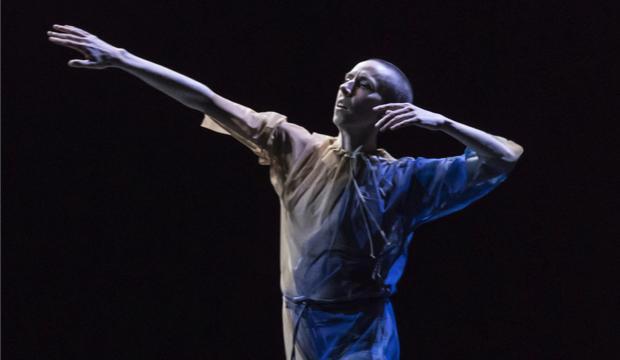 The Yard is at the forefront of innovative theatre and performance in London, and their NOW festival aims to share some of the most cutting-edge and relevant work being made, well, right now. Week Two presents Ultimate Dancer and Julie Cunningham’s fire bird, a double bill of striking visuals and classical music, with very different moods and styles.

Lite Metle’s Ultimate Dancer begins with the nearly-imperceptible shifting of a large, square mirror in space. Metle cradles it between her knees, and gradually shuffles and pivots it to its opposite angle. This isn’t particularly interesting at first, but the piece gains dynamism when she begins to use her legs and torso to explore the shapes she can make with her reflection. Paired with a whispered voiceover, the effect is soothing and meditative, though it’s not initially clear what she is trying to achieve.

As Metle’s reflection takes on a fluid, supernatural form, the voiceover reminds us that nothing is what it seems. Metal may seem heavy and solid, but its ability to melt and refract light gives it a rather different quality. An eventual soundtrack of classical music reminds us that even the most sweeping score just consists of many singular, musical moments on individual instruments, the way atoms and the space between them make up everything else in the whole world. It’s slow, sobering stuff – as solid and real the present feels, it will all eventually crumble into dust.

Julie Cunningham’s interpretation of Stravinsky’s classical score has a more formal structure than Metle’s piece and certainly feels more polished, but its physical qualities are a great complement to Ultimate Dancer. A red string zigzags a mostly-bare stage, forming a landscape that must be ducked under or scrambled through. Sweeping, angular movements propel her through the space, both on her feet and the floor. There is a clear journey of discovery, ending in a climactic and inspiring display of strength and confidence, the opposite of the quiet exploration of Ultimate Dancer.

A double bill consisting of a live art piece and a contemporary dance is not a common thing, and these two are excellently paired. Though they both feel nascent and still in development, and the design is suggestive rather than fully integrated, they carry a sense of bold experimentation and give the sense that they are indeed work being made right now.