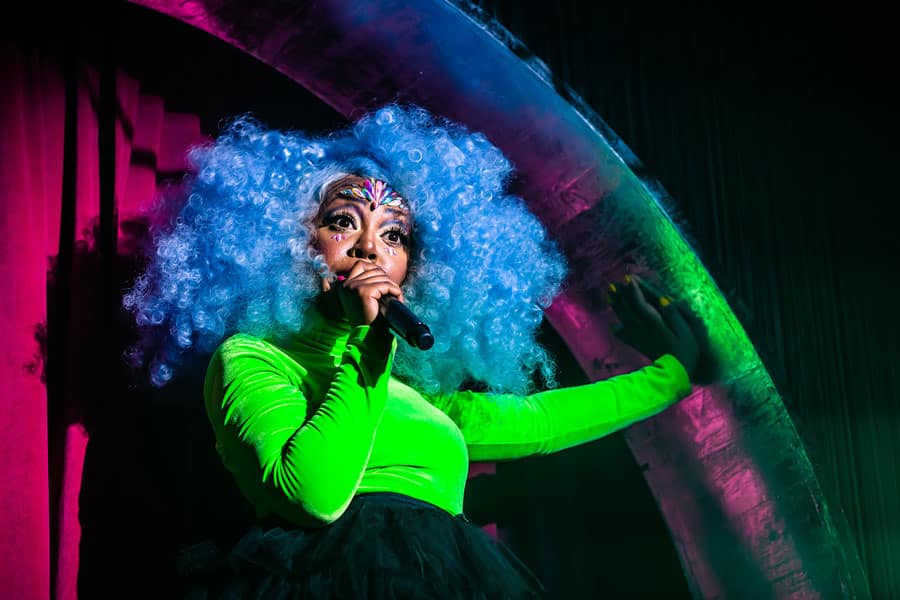 Leaving the Royal Court after watching Ellie Kendrick’s new play Hole, I overhear another audience member describe feeling like she has just been “hit over the head with a sledgehammer”. It’s a pretty apt description.

Hole is an exploration of feminine rage, performed by a diverse ensemble. The women in this show are great, symbiotically exuding a boundless energy that contributes to their powerful stage presence.

Helen Goalen and Abbi Greenland, two parts of RashDash, throw everything but the kitchen-sink at Kendrick’s text in their direction of the play, perhaps demonstrating a lack of trust in the written material.

The piece starts well, as the women try to speak and are continuously, and imaginatively, interrupted and lowered into a “hole” beneath the stage. It’s a quiet but potent sequence, articulating more in five minutes than the next sixty does as the show builds up swiftly to the loud, chaotic tones that will make up the majority of it. This wears thin quickly, concealing any discourse of interest in the text. Furthermore, most of the rest of the show’s content seems to be made up of contact improvisation or clowning rehearsal exercises that Goalen and Greenland have facilitated and then thought: “That’ll do. Shall we just stage that?”

However, when we return to the more restrained movements of the show’s opening, with the expression of a more singular voice, it becomes clear that Kendrick’s feminist agenda is as vague as suspected during the shinier, flashier, bolder parts. Kendrick’s writing, though, has real potential, particularly evident in her re-interpretations of classical mythology. Yet, she’s just not clear enough about what she wants to say about being a woman today; we’re all more than just angry.