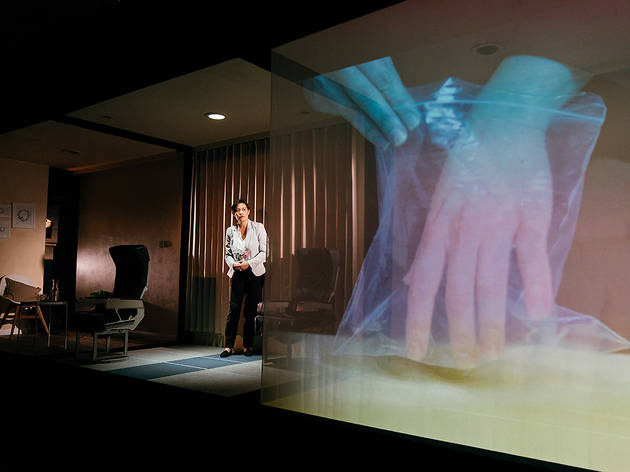 Lisa is on a work trip with two colleagues. Things at home are a bit stressful and she normally isn’t included at this level of project management, but she’s fine. Not long into the flight, an attendant asks to have a word with her at the front of the plane. The devastating news she receives sets off a chain reaction of grief, anger and meltdowns. As Lisa tries to hold it together in front of the other passengers, reality slips from her grasp.

Brad Birch’s script for a solo performer has some moments of wonderful language and a spidery plot that is linear in terms of the plane’s journey, but the collapse of Lisa’s mental state is anything but. As Lisa deteriorates, her experiences become more clearly unreal, though some of what she narrates in the run up could be true – or not. It has a destabilising effect, enhanced further when paired with the binaural headphones through which we hear all of the dialogue and sound effects.

Though the headphones are fun, they don’t add much or dramatically alter the experience of taking in the show. In an intimate theatre like the Yard, there’s not much difference to listening to sound and speech more directly. Though there is some directional sound, there’s not enough to fully justify the headphone use.

Wendy Kweh plays Lisa, an anxious woman struggling to cope with what the world throws at her. Her nervous energy teeters between being ok and definitely not being ok as she tries to maintain British composure is a public space. Combined with a volatile narrative, the overall effect is unsettling and surreal, like a dream or watching a tragedy unfold on the other side of the world.

The fragmented and twisting dramaturgy requires a lot of audience attention, though there’s a sense that it’s dragging Lisa and those watching her along for a ride. There are some moments of brilliance and the structural disintegration is impressive, but sometimes the experience is unpleasant what with its confusion and instability rather than that of excitement and adventure.

A Kettle of Fish runs through 13 October.