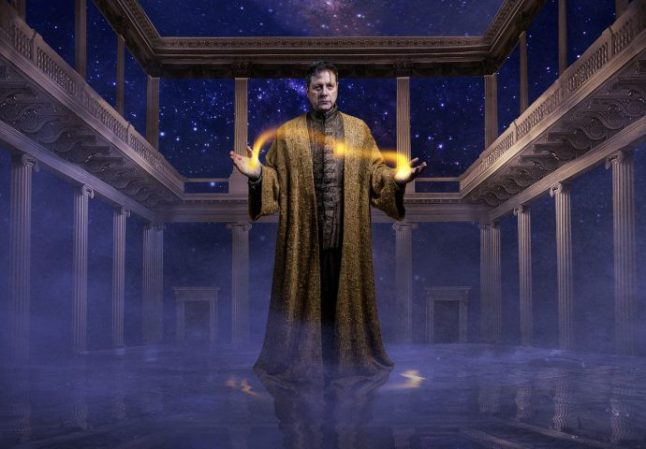 There is something magical about watching this open air production of The Tempest in the gardens at the Actors’ Church. Sun going down, wind whistling through the trees – it is such a beautiful setting and the lighting and sound design by Benjamin Polya and Filipe Gomes respectively set the mood perfectly. Actually, the performance itself could have done with a little more actual magic*, not that we don’t appreciate a good coin being pulled from behind someone’s ear trick.

The Tempest deals with a lot of heavy issues. It’s not just a nice old wizard going back home – there’s colonialism, rape and slavery to stomach. It often feels like maybe Prospero deserved to be marooned on an island, he might be the protagonist but you can’t imagine many people that would want him around. Jamie Newall’s performance focuses very much on this angry, vengeful side of Prospero. Drunks Trinculo and Stephano provide lovely light relief, but this is a dark world that’s been created by Iris Theatre.

Act IV’s masque is performed in the church itself. Enormous projections of the spirits loom over the pews below as the wedding ceremony between Miranda and Ferdinand begins. Everything in the church is very grand and elaborate, and Prospero stands in front of an infinitely starry sky although there is still very much an air of uneasiness that comes with this interpretation of the island.

When I studied The Tempest at school I remember being very annoyed that Prospero decides to abruptly finish these celebrations right in the middle of proceedings – so rude. And having to leave the warm and wonderfully designed Actors’ Church to chase Caliban and his mates definitely reminded me of this feeling. It’s your daughter’s wedding, deal with the idiots later.

Promenade, however, is mostly used very well. There’s not too much scene changing that you feel like a jack-in-a-box, each move has a reason to it and you get to explore the whole of the island/gardens. Daniel Winder’s direction doesn’t disappoint.

Nothing says summer like an open air Shakespeare, but my top tip is to bring layers. Even if it has been the hottest day on record, you’ll need a warm jacket to sit outside with – thank me later.

The Tempest runs until 28th July.

*Do I mean magic tricks, or do I actually believe in magic? You’ll never know.