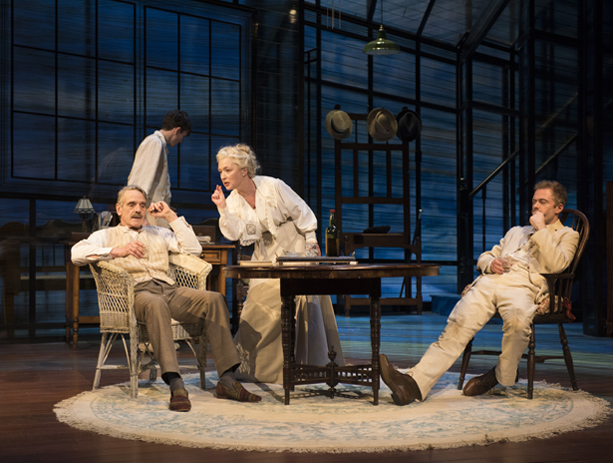 On its surface, the title Long Day’s Journey into Night describes the looooong four acts it takes Eugene O’Neill’s play to chronicle the story of one day-into-night in the life of the Tyrone family. Metaphorically, it suggests how the play utilizes this micro-slice of life to depict how this autobiographical family descends from the daylight of sanity to the darkness of madness in a macro sense, and how their projected reality in the sunlight of day masks the true darkness of night lingering underneath.

On a purely practical level, the title also captures how a lot of modern audiences view the play: as a LOOOOOOOONG journey into the bored sleep of night.

So you can imagine how I felt heading into the latest revival to play New York City, courtesy of the Bristol Old Vic. Despite my general fatigue with the play, this Manhattanite still trudged all the way to the Brooklyn Academy of Music because, as a self-proclaimed Man of the Theatre, how could I miss the entire reason it was mounted again in the first place? Actually, make that two reasons: Leslie Manville and Jeremy Irons tackling such iconic roles.

Unfortunately, such a commercial raison d’être doesn’t necessarily translate to artistic success. Besides Rob Howell’s expressionistically translucent set, matched with Peter Mumford’s subtle lighting (both of which contain shades — literally — of the Almeida’s revival of Ibsen’s Ghosts from a few years back, which also starred Manville) Richard Eyre’s entire production conforms to traditional and thus stuffy period aesthetics, reinforced by the loud performativity of the aforementioned leads.

A conventional review could wax poetic about how the unconventional set is rooted in a thematic basis. I could pontificate on how Manville adopts the manic disposition of a recovering addict succumbing to the disease and, thus, her own sense of insidious self-hatred. And I could point out how Irons surrounds himself with the steely resolve of the old world, a sort of facade that attempts to obscure the creeping new world problems plaguing his ideal, idyllic, old-fashioned familial domesticity.

You know what I’d rather be doing?

I’d rather be praising Manville and Irons for using their commercial clout to shine a spotlight on a deserving new play by an up-and-coming playwright.

Programming complaints are usually directed at producers, often considered the gatekeepers deciding what work graces stages worldwide. But these impresarios must take into consideration how to put bums on seats. And who brings more bums than the royalty of stage and screen?

But why don’t they receive more criticism for repeatedly appearing in the same old plays?

Don’t get me wrong – revivals serve a purpose. I worship at the altar of Ivo von Hove for a reason; radical reinterpretations of classics are my jam, but they’re few and far between.

To justify staid revivals, their defenders cite people who haven’t been there and haven’t done that: new generations of audiences! Whenever I’ve found myself on this soap box before, others always ask, “BUT WHAT ABOUT THE CHILDREN?! DOESN’T EVERY GENERATION DESERVE A CHANCE TO SEE THE THEATRICAL CANON AS IT’S MEANT TO BE SEEN – ON THE STAGE?!”

Sure. But that justifies a production of Long Day’s Journey into Night, and other incessantly revived work (*cough* Shakespeare *cough*), once a generation! A major production every few years is excessive, especially since regional theatres produce local permutations ALL THE TIME.

Educating the young on theatre history is great and all, but what about expanding the canon to include new and diverse voices? Isn’t that just as imperative, if not more so? Will these kids really be inspired by the same old plays? Or is it more likely for them to be converted to the stage if they see themselves and hear their voices coming from that stage?

That’s much more likely to happy for a play written by a contemporary of theirs, and such unknown work usually requires the help of famous actors to find their way to the most prominent stages. Nothing draws eyeballs like celebrities, and it takes eyeballs to make any sort of significant difference.

I understand the appeal of these monumental roles. Actors are reared watching their favorite performers tackling such titanic parts. But how can wielding the power of their stardom purely to join these arbitrary ranks be considered anything other than an ego trip? They’ll brag about the selflessness of bringing crucial history to life for new generations, but the underlying selfishness cannot be ignored.

The only way to change this trend is simply by refusing to participate in it. Actors shouldn’t be evaluated based on how their performances of characters passed down through the years compares to their predecessors. Rather, we should celebrate those that introduce new talents to future history books; that’s the best way to ensure every generation gets to experience history in the making.

Long Day’s Journey into Night ran at BAM until 27 May following a West End run.