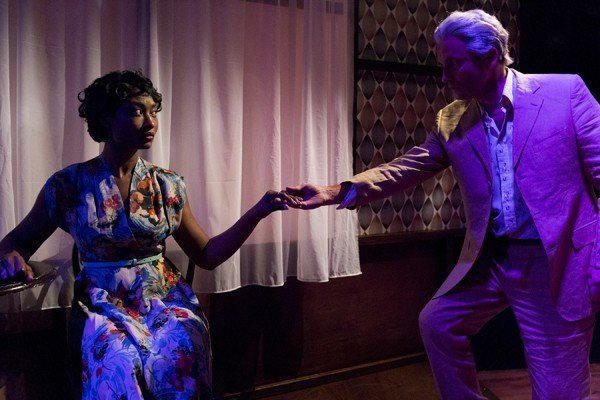 This is the story of little known Eletha Barrett (Vanessa Donovan), a Jamaican woman who was married to film star Peter Finch (Stephen Hogan), for his final twelve years. It begins shortly after Jamaica’s independence, and highlights the personal and public struggle of the interracial couple against the backdrop of 60’s and 70’s politics.

The premise of the story is intriguing but the exposition and first half are slightly underwhelming, due perhaps to there being a blackout after every scene covering set changes that are much too slow. It’s not the actors at fault, but the monotony of it works against their performances.

Alexandra Mardell owns the space as the enigmatic Liverpudlian and wannabe star Debbie. Mardell injects much needed energy, and suddenly it feels as if we’re off! Although seen only twice throughout, this character appears to be written with more nuance and complexity than Eletha.

The second half is far more electric; Donovan and Hogan imbue a real weight to their characters’ relationship, supporting each other with greater pace and passion.
The only real disappointment is that as Hogan’s Finch builds wonderfully to the “performance of his life”, it appears Mad as Hell is a story about Peter Finch, with Eletha Barrett peripherally woven in. It’s ironic given the social and political references, and a shame, as Donovan is beautifully suited to the part, and more than capable of handling it.

Overall you feel that this play, its actors, the stunning visuals, and movement, all deserves a much bigger space. Writers Cassie McFarlane and Adrian Hope have created a lovely imagining of perhaps what was and what might have been.

Mad as Hell runs through 24 February.