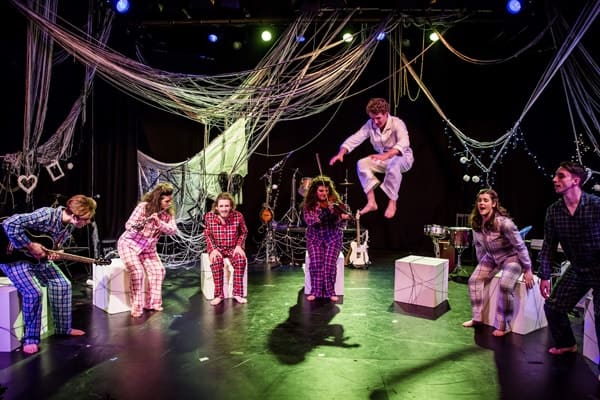 Think of your favourite stories as a young child. What did they have in common? Adventure. Youth. Fantasy. Foreign lands. Probably at least one good fight. Stories like Alice in Wonderland, Treasure Island and Peter Pan are still popular, and for good reason. They’re compelling, well told stories.

But as a proud killjoy feminist, returning to these childhood favourites as an adult has proved troublesome. Action to the Word’s fairly solid reinvention of Peter Pan for seven actor-musicians is a fun, inventive adventure story that stays close to the original.

That’s the trouble with this production. J M Barrie’s story has all of the elements of a great story, as well as overt racism, narrow gender roles and more toxic masculinity than an MRA subreddit. Apart from a single, throwaway reference about how we don’t use the term ‘Red Indian’ anymore, there are no challenges to the painfully outdated aspects of the story. The Tradition versus Progress conflict sits along side the moral question of whether or not we should be perpetuating these attitudes in young children – who don’t know enough to see these problems – by continuing to tell these stories.

I wrestled with this on the train home in a series of texts to my boyfriend – who didn’t see the show with me and patiently listened to my tirade – but I’m no closer to answering my own question of how to determine the value of a show that’s executed well, but maybe shouldn’t have been chosen in the first place.

But, but, but…it’s certainly charming. Upbeat, live music is used heavily, to the point it’s verging on gig theatre. It’s integrated well, and there’s a bit of an origin story before launching into the more familiar Peter Pan adventure. More time on the mortal Pan’s adventures in Kensington Gardens would be welcome; as is, it’s too rushed of an introduction. The main Peter Pan story featuring the Darling children and Captain Hook dominates, with the cast multi-rolling as the plethora of characters the Darlings encounter in Neverland.

On the other hand, there’s Wendy. The sweetly headstrong pre-teen forced to grow up and become a foster mum to a bunch of degenerate boys in a land where they are all eternally children is ironic, sure. It’s also incredibly offensive that the only girl is forced into the homemaking role of a child bride whilst her play-husband can treat her terribly and go off on endless adventures. Though she protests a little, she largely agrees to motherhood out of love for Pan. It’s only after he totally rejects her that she realises her Dad is a better role model.

Though the Captain Hook here is too casual and unthreatening for the hero/villain dynamic that drives the story, he and Pan have a killer fight scene that is shockingly brutal for a family show. Heightened and set to music, it’s practically cinematic. The low-tech, learning-to-fly scene has similar impact, but with joy.

A running theme from the beginning of the story is, “If you believe it, it’s real”. Applied to food, flying, mermaids and villains, it’s a lovely inclusion advocating for imaginative play. But it’s a missed opportunity to address some of the troublesome aspects. It wouldn’t have to be preachy or overly didactic, but a little bit goes a long way when there’s nothing else.

So, is it a good show? Yes, certainly parts of it are. The multi-talented (albeit all-white) cast tell the story well, even though there are a few issues with the script. But should we be telling this story to children? I hesitate. Maybe it’s time to consign Peter Pan to the archives and find make a new tradition that treats all genders and races equally.