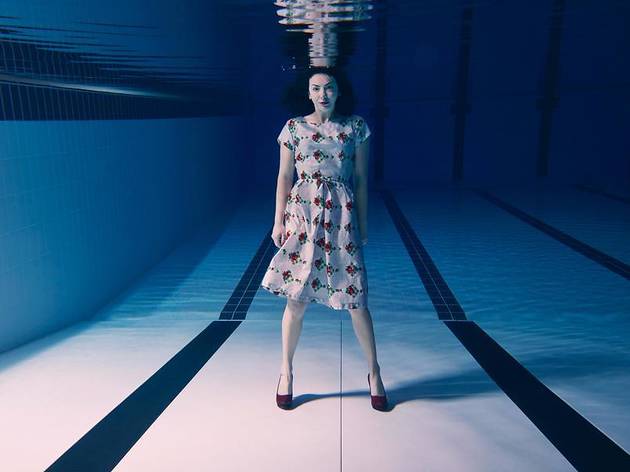 “This is for people who burst at the seams.”

How do you cope with anxiety when you’re too young to know what it is? This initially appears to be what Good Girl is going to be about – how as children it is so instilled in us  to please others, that the pressure completely warps our sense of self and creates huge problems within our relationships.

Naomi Sheldon is a brilliant character actor. Her physicality effortlessly changes  between her three childhood friends. They discuss orgasms and bring guinea pigs back to life against a backdrop of some great 90s references – I remember plenty of friends a little older than me who spent ages trying to levitate pals while chanting “stiff as a board, light as feather”. She also has a real gift for language. She motors along in her monologue, making ordinary stories of her teen days pack a real emotional punch.

The musical interludes between scenes need some adjusting. The snippets of songs mark the end of each story, but they’re just a little too short to enjoy Sheldon’s great taste in music. She then has to fight to be heard over the music when she wants to start the next anecdote, and it seems as though the change hasn’t been properly rehearsed.

However, the ending completely knocks me for six. Sheldon’s lead character GG gets herself and her friend into an awful situation, and we may or may not be meant to forgive GG for doing this because she struggles with controlling her anxiety and emotions. If we are, it robs the play of being an important story of what it’s like to be a girl growing up in the world. I hope it isn’t and that my initial reaction of having a bit of a cry and reflecting on my own childhood is the right one.

Good Girl runs through 2 December at the Old Red Lion, then transfers to VAULT Festival in 2018.