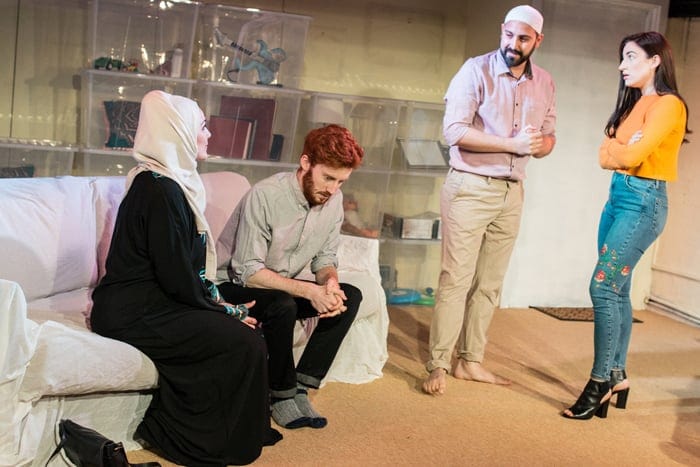 Director Annamiek van Elst states that, “now more than ever, there is a need to represent narratives around Islam in a positive light”. Too right. Our overly white and insular theatre is trying to diversify, but it still has a long way to go and systemic white, middle class administrations’ unconscious bias to overcome.

Becoming Mohammed, in its story of a young white man’s conversion to Islam and the subsequent familial negotiations of his journey, not only adds to the diversity on the London fringe but reframes the stigma against white, western Christians converting to Islam, and the inherently peaceful nature of the religion. Though the episodic scenes’ choppiness and a large timespan leave out huge chunks of action which are later discussed, the issues raised are vital contributions to theatre and wider social discussions.

Jack Hammett is Tom, the enthusiastic and devoted recent revert ( we learn Muslims use this word instead of ‘convert’) to Islam. His girlfriend Aminah and her brother Musa make for a cheerful, warm group who hang out, eat and pray together. Their dynamic is disrupted and challenged when Tom’s sister Sarah turns up in their Rotterdam flat unannounced. Tom and Sarah aren’t close, and haven’t spoken in the year since Sarah moved to London for work. Her unashamed, progressive attitudes clash with Tom’s newfound conservatism and triggers a series of conflicts that bubble up over the course of the following year.

Short scenes are spread over a year or so, mostly determined by Sarah’s appearances. Claudia Marinaro’s script is let down by her choosing to not keep Tom and Sarah in touch, so the action is often him updating her with things that have already happened, rather than seeing them onstage. Other scenes have a political focus, but the subplot is underdeveloped and doesn’t fully connect to Tom’s relationship with Sarah. Marinaro does however have a good sense for generating conflict out of contrasting characters and endowing them with detail. Aminah is particularly well rounded.

Nadia Lamin’s range is showcased as Aminah. Initially friendly and reserved, after she and Tom are married we see that she is a confident modern woman as well as an observant Muslim. She shows the two are not mutually exclusive.

Though the script needs some further development to give more body to its great ideas, the intentions are clear and the performances are generally good. Now if only it could be compulsory viewing for the white British public.

Becoming Mohammed runs through 21 May.