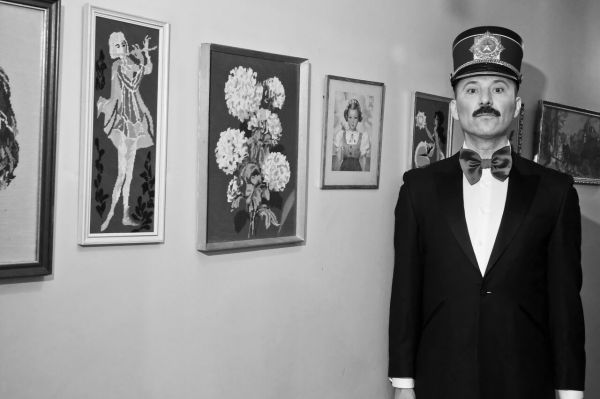 On arriving at the front door of Latvian House I am by a very smart, besuited Italian butler who refuses to let me in and won’t really give me a clear reason as to why. Had the performance begun? He suggests I get a drink at the bar in the basement but won’t allow me to take the most obvious and direct route to said bar; instead I use the tradesman’s outdoor, wrought iron steps entrance. The bar seems to be in Riga, Latvia, what with all its eastern Europe chic. I stand at the bar waiting to order. No one comes. Meanwhile Latvian drinkers enjoy interesting looking beers, chat in hushed tones and completely ignore me. I stand, thirsty, with multi-coloured disco ball lights streaking across my face. Is this all part of the performance? Or am I in a dream?

At 7:30pm on the dot, the butler ushered me and other confused punters upstairs, drawing our attention to the pink walls and the large mirror. The audience are seated at a large dining table and offered rather good wine, and there is a plate in front of us, on which is a blindfold and a menu offering a starter of ‘Salty soup of English rules’ and mains such as ‘The Bald Soprano (with a Romanian yoghurt)’. It is clearly going to be, in the Ionesco tradition, an absurd evening. What follows are vignettes from Ionesco plays including The Bald Soprano, Ionesco’s first play written in 1950. The characters Mr and Mrs Smith host a dinner part for Mr and Mrs Martin. The Fire Chief is also in attendance and tells a story which doesn’t make any sense. Mary the maid enters and reveals she is the lover of The Fire Chief.

Eugene Ionesco was a Romanian-French playwright who embraced the absurdist genre, but was seemingly vague about any meaning his plays were intended to have. The Bald Soprano appears to be a parody about the English middleclass, but Ionesco wrote that he had no intention of parody, but if he were to be parodying anything, it would be everything.

The performance alternats between the absurd scenes and interviews, in French and then translated into English, with Ionesco. His thoughts were philosophical, modest, touching and very sensitively performed by Sean Rees, whose French is evidently parfait. The notion that ‘your life is not absurd, it is existence, existence is absurd’, seems to sum up the evening’s raison d’être.

At some point, we are asked to put on our blindfolds and are treated to a sensory cocktail of wind gently blowing, liquid being poured (our wine glasses were replenished), whispering in French and a dreamlike soundscape. It adds another dimension to our collective absurdist experience. In fact, being at the dinner table with fellow audience members allows for the gauging of our various reactions, which in itself provided entertainment. The gentleman opposite, for example, travelled along a theatrical spectrum from abject boredom to being utterly enthralled and enchanted.

The atmosphere could be enhanced further with better lighting; the harshness of the chandelier bulbs create a clinical coldness. Just a gentle spotlight on the actors’ faces, a little haze perhaps, is all that is needed to give this most fascinating of evenings a finishing touch.

Ionesco/Dinner at the Smiths’ runs through 1 April.