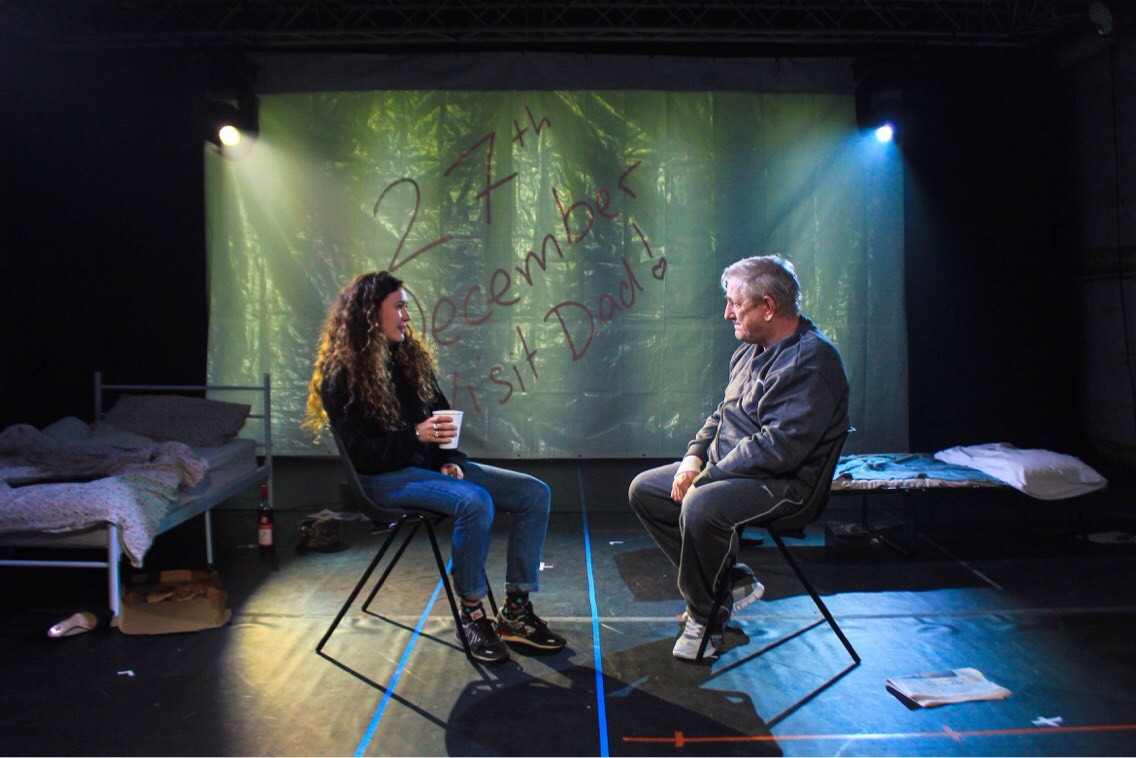 Prison dramas are practically a genre in their own right on television and the silver screen, but for the stage they are not so common (apart from in a historical context). Daddy’s Girl, which is directed by Alice Malin, focuses on Terry (Mark Wingett) –  in jail for life for armed robbery – and his adult daughter Eliza (Georgia Brown).

The play itself isn’t overly preoccupied with the state of the prison system. Instead, the similarities and synergy between father and daughter are explored – the sense of inertia and limbo in their daily lives, and the daughter’s eventual recognition of the need to forge ahead on her own. It’s no coincidence that the play is set during the month of December when more time is traditionally spent with friends and family, and the absence of  anyone to call nearest and dearest is keenly felt.

As Terry’s only significant relationship and connection to the outside world, Eliza feels obligated to be there for her father, whose secret, frequent phone calls takes up a lot of her time and energy. Small wonder then he fills her every waking thought, so that apart from subliminally adopting some of his more antisocial tendencies, she’s ambivalent (in the truest sense of the word) about when he does or doesn’t ring.

For the most part the play stays in the present, but the occasional flashback reveals the courtship of Terry and Eliza’s mother, and the first time Terry met his daughter as a child – after a prolonged ‘absence’. While these incidents are of interest, the real illumination into Terry’s psyche is his recollection of his childhood and his mother – where his persona developed out of necessity.

At her lowest ebb, Eliza realises their relationship is more like a marriage – putting up with his mood swings, being his sounding board week in week out, and limitations placed on what she wants to do. This epiphany at least results in her verbalising what she doesn’t want out of life, the first time in the play that she isn’t a passive participant in her own life.

The parallels in the lives of Eliza and Terry aren’t always signposted, but the flippant remarks they make offer big clues to understanding their perspectives, with both undergoing an existential crisis of sorts. If one is alone, if life never changes, do you really exist?

Brown – who as well as playing Eliza wrote the play – drew from her own experiences as a young woman whose father most of his life in jail. While this semi-autobiographical play doesn’t offer profound insights into the human condition or the criminal justice system, its depiction of a loving relationship between father and daughter is palpable, as is their quest to find some meaning to their lives.