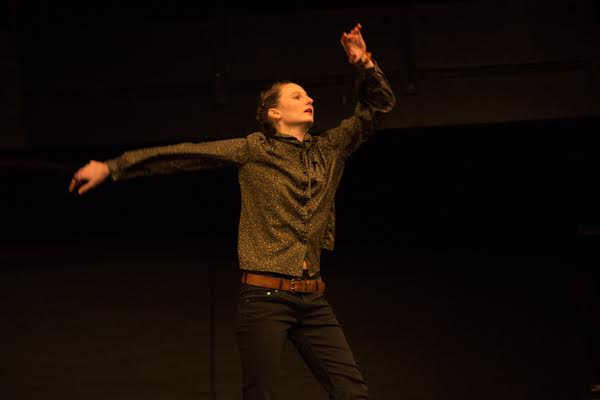 What happens when a dancer and performance maker loses the ability to dance due to chronic pain? She makes a solo dance piece with hardly any dance in it. A mix of emotive description, encounters with medical and health practitioners, and her own research tell the story of an injury and the subsequent pain that wouldn’t leave her body. Pointedly still and so quiet that she needs a mic, Laura Dannequin’s resilience makes a compelling piece of solo storytelling that mourns the dances her body wouldn’t allow her to make.

An impassioned monologue about all of the dances she wants to create is followed by a voiceover describing her dancing, whilst Dannequin stands perfectly still. Though her expression gives away nothing, she exudes a sense of loss; the simplicity and contrast between aural and visual imagery are captivating and heavy with grief. A sequence of small flexing movements of her bare back against a litany of treatments and diagnoses she sought from all over the world creates a similar effect, this one with added existentialism and frustration with a medical community that still knows precious little about the human body and its mechanisms. It’s captivating viewing in its simplicity.

Much of the piece examines Dannequin’s relationship with her body and her pain. It becomes a separate entity that she confronts with a range of emotions and dogged research to understand why hers is so persistent. There’s a scientific lecture on types of pain and her own educated theories, but like the rest of her piece’s components, there’s an emotional undercurrent that carries her words. A cathartic climax celebrates her mysterious recovery and the overarching effect is one of beauty and wonder.

Dannequin miraculously withholds the anger she is more than entitled to feel, instead she shares a grounded story of bodily rebellion imbued with emotion and strength. Hardy Animal is a piece of simple, quiet beauty that doesn’t let itself be bogged down with science or negativity.

Question: do you think people are happier now or in the past?

It’s a big one with no right or wrong answer, but three actors debate it on stage for over an hour in The Destroyed Room with a deliberate diversion to terrorism and the refugee crisis. The extended, semi-improvised conversation is filmed by two live-feed cameras broadcasting to a large screen above the middle class, sanitised lounge and kitchenette that makes up the set. The audience, more like that of a televised political debate, can choose to watch the close up footage or the live wide angle. After the subject matter turns to violence, voyeurism and relationships between the onstage personas break down due to clashing viewpoints, the inescapable reality of the refugee crisis floods the stage in this subtly provocative, highly metaphorical piece of experimental performance that makes the audience reflect on how it perceives these events.

Driven by the idea that we view the world through the lens of the culture we live in, the conversation quickly heads into to the violence bedded into modern life. There’s a pretty clear, scripted signpost to steer the topic in this direction, which although necessary to ensure the conversation hits the points the production wants to make, is disappointing after the promise of improvisation.

Another question: have you ever watched one of those videos by terrorists of them killing someone?

There’s an awful, revealing confession from Barnaby Power that the three discuss for some time; it’s this subject that really starts to press the audience’s emotional buttons. Personalities are revealed, and gloves come off. It’s interesting to consider how much of what we see are characters and how much are the actors’ own selves. Power’s inner conservative conflicts with his liberal exterior, Pauline Goldsmith is flamboyant and brash, Elicia Day is the middle ground between the two and has a secret sensitive to the others’ sweeping generalisations.

An anti-theatricality to this production makes the form both experimental as live performance and occasionally a bit dull. The conversation certainly has a dramatic arc that reads like a script, but even with the live feed projection, there’s little visual variation until the end. The content has merit, but the mind can wonder until the conflict starts to emerge and things fall apart, both literally and metaphorically.

The Destroyed Room is a hard one to pin down, delightfully evading categorisation by being both small and worldly at the same time. Though the amount of time spent in sit down debate feels to long, it accomplishes its goal of reflecting on how we view world events through the lens of Western privilege.

The Destroyed Room runs through 14 May.