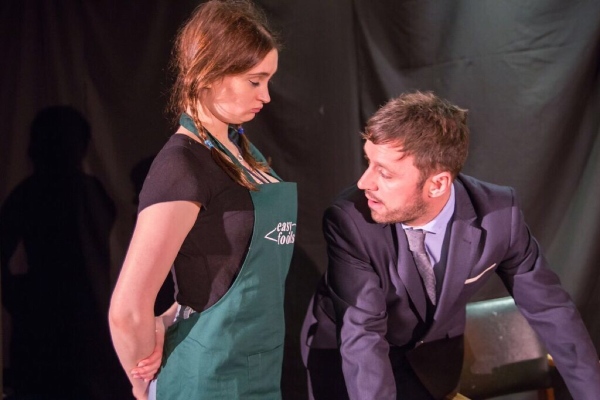 The wonderful thing about new writing is the potential for discovering unknown gems, perfectly formed and ready for a transfer or a tour, or a piece that is still finding its shape but its promise is evident. There’s also the chance of having to endure work that, though trying its hardest, isn’t ready to be put in front of critics. Goodnight Polly Jones is the latter. In its current state, Andrew Sharpe’s script bears more resemblance to a GCSE issue-based devised piece than a play suited to a professional small-scale theatre. Isolated scenes at key plot points and painfully long transitions with busy sound design and terrible voiceovers turn sexual assault and rape into a banal one hour, exacerbated by a performance matching the script’s clunkiness.

Ben Keenan as the jumped up, inappropriately hired Peter provides some redemption. He handles the awkward dialogue and tenuous circumstances extraordinarily well, adding gravitas and emotional truth to the HR manager with a disgustingly flippant disregard for sexual consent. Polly (Victoria Morrison) at her youngest and most immature supermarket clerk manages to match him, but as the older accountant taking that supermarket into administration, she is self-conscious and awkward.

The root problem of this production is the script. Composed solely of four distinct scenes at different times, they show dramatic change in tone and character development, but the story is neglected. This is potentially an important, character-driven play, but there’s no subtlety to the plot – every progression is beaten to death with dialogue rather than shown. The transitions attempt to fill in some gaps, but they too are overt, too long and too cringy, with am dram worthy voice acting. The resolution is half-baked, and Sharpe’s propensity for signposting (that treats the audience as if they were children with ADHD and learning difficulties) misses a glaring, albeit predictable, opportunity to tie up loose ends in the final moments of the play. The scenes as individual units aren’t awful, but the connective thread between them is most thin indeed.

Goodnight Polly Jones doesn’t completely lack potential, but it is in such an early stage of development that it feels wholly inappropriate to stage it in front of a judging audience. A scratch night or a workshop? Absolutely. Though it needs extensive work, it addresses an important issue with some isolated nice moments.