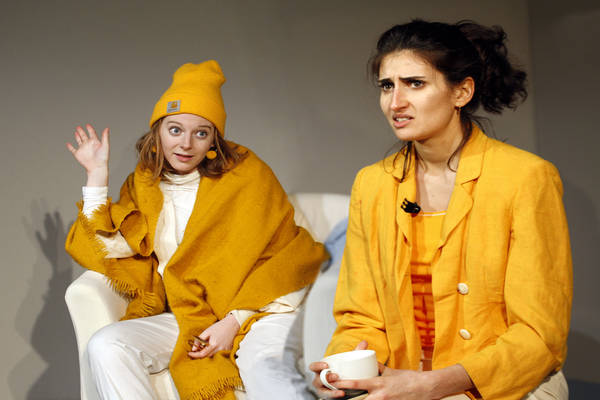 Women get the raw end of the deal no matter how young or old they are, how mainstream or alternative. Two late twenty-somethings, acquaintances through a mutual late friend but with completely opposite personalities, end up bonding over important issues but with dry humour and restrained emotion. Despite the content, Eggs avoids catering purely to women. The frank honesty is stereotypically blokey, covering topics such as masturbation, one-night stands and careers – issues that are obviously relevant to women, just not often spotlighted so directly – as well as fertility, marriage and the fear of aging. Structurally episodic and a bit clunky, Eggs is also bitingly funny and poignant, particularly for those of us in our 20s and 30s feeling like we don’t really fit into the world.

Playwright Florence Keith-Roach uses the versatile symbolism of eggs throughout, albeit obviously. Even the set and costume by Clementine Keith-Roach and Lily Ashley are all white and yellowy-orange. It’s an interesting catalyst for written material, and Keith-Roach riffs in numerous directions from that starting point. Fertility is an obvious path, but egg shaped vibrators less so. This makes the events in the story nicely unpredictable, but Keith-Roach does a great job tying up the issues into a satisfying end.

Keith-Roach and Amani Zardoe are girl 1 and girl 2. Girl 1 is a hippy artist fighting the status quo; Girl 2 loves her corporate job and can’t wait to marry and have children. Both performances are heighted and somewhat ‘Sex in the City’-esque, particularly at the beginning, where they feel like chick lit but on stage. Fortunately, both actors settle into more naturalistic performances after a couple of scenes. Unlike the terrible television series, these unnamed women develop depth and genuine conflict, even though they are not the most likeable of characters. Their insecurities and flaws are believably human, as are their prickly, awkward encounters that evolve into a genuine care for each other.

Eggs is heart-warming without being cheesy, and substantial but does not preach. It provides gentle solidarity to women who feel like their lives aren’t everything they’re supposed to be, and even though the earlier scenes feel disconnected from each other, the last third of the play really rings true. It’s a good piece of theatre for a second play and is a pointed reminder of the fact that no one really has their life together.