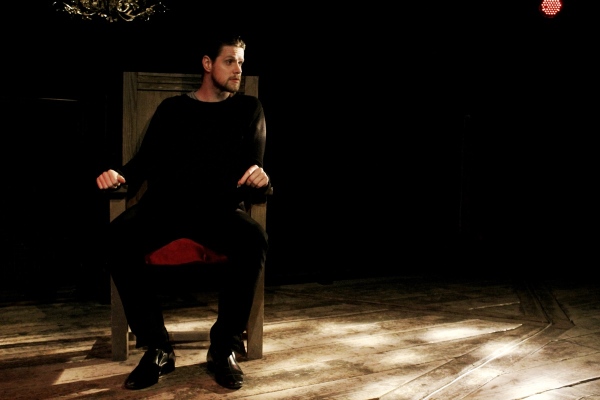 The Rose, the tiny fringe theatre built on the remains of its Elizabethan original, is one of the most unique theatres in London. It has its issues, though. Rather than the hierarchy with an artistic director at the top, it is managed by a team of artistic associates, all volunteers. Due to the lack of  an individual’s clear programming vision, the productions here are hit and miss. Their current production of Hamlet, though it has a few moments of invention and effectiveness, largely misses the mark due to poor performances and a huge reduction in length, which hacks the dramatic arc and character journeys to bits.

Of the cast of seven, Luke Jasztal as Horatio is the only one with completely consistent characterisation and stage presence. As the confident, loyal friend and member of the court’s inner circle, he holds the plot together and picks up the energy in lagging scenes with warmth and charisma. Chris Clynes in the title role is more believable once Hamlet decides to feign madness. His ‘to be, or not to be’ is simple and honest, and he is full of energy whilst deeming Polonius a fishmonger. Clynes’ initial sullen sulk casts him as an overgrown, spoils teenager rather than a grieving young adult, but fortunately he gets over that quickly. The remaining cast tended towards either completely flat, monotone delivery or overwrought melodrama, with little light and shade between the two performance styles. The verse handling is also hugely inconsistent amongst this cast.

At nearly three hours if left intact, to reduce Shakespeare’s script to 90 minutes removes a lot of action. Though director Diana Vucane’s edit is linguistically seamless, major plot points are inevitably lost. The focus on Hamlet is maintained, but with so much of his dialogue cut, his character choices come across as unjustified. With The Rose’s 90-minute limit on productions, perhaps Hamlet isn’t the most suitable for this venue.

Some of Vucane’s choices were strong, whilst others questionable. Hamlet’s use of puppets in the players’ scene was inventive, but the impact of the scene was diminished with the murder reveal coming from Hamlet rather than strangers. Contemporary dress also worked in this casual, reduced version of the original but the number of costume changes was excessive and pointless. I stopped counting after Ophelia’s dresses numbered four, in as many different scenes. The rich sound design that stood in for the ghost and scene transitions was rich and spooky, but inexplicably gave way to vintage show tunes. (I’ll never know why “The Lonely Goatherd” made an appearance, or Judi Dench’s rendition of “Send in the Clowns” after the evocative introduction.) She utilises the rear of the The Rose rarely, but it is striking and powerful when she does. If she cast the play, she ought to look at her audition process in order to secure more consistent talent. No lighting designer or fight choreographer is credited, but both of these elements are well done and can count towards Vucane’s strengths as a director.

Though the abbreviated length works against the original play, with the performances given it largely goes in this production’s favour. Diana Vucane shows some promise as an emerging director, but her choices need more clarity in their justification. Luke Jasztal is a pleasure to watch, and Chris Clynes gets closer to his level eventually, but this Hamlet, like the Midsummer mechanicals, is tedious brief.