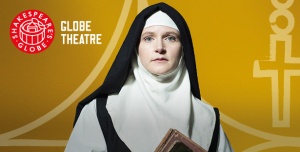 Sor Juana is a great writer of plays and poetry known throughout Mexico, or ‘New Spain’ as it’s called in the 1600s. She is a scholar with progressive views on women’s rights and unafraid of expressing them. Juana has also committed herself to the prayerful life of a convent nun. Newly appointed Bishop Santa Cruz seems supportive of her unconventional activities, but the older, more conservative Archbishop Aguiar y Sejas from Spain adamantly opposes her. Her father confessor, Fray Antonio, balances precariously between the two men’s views as Juana faces the risk of a heresy charge and the Inquisition. Outside the convent walls, there is conflict between the church and the secular court and within the convent and the plague is coming. Heresy of Love is a play that operates on many levels both microcosmic and globally. It is blatantly feminist but also looks at how horribly women can treat each other, male conflicting attitudes towards women, and confronts issues within the Catholic church. The script captures the style of Spanish Golden Age plays: deception, politics, religion, danger, love and downfall are present in this intimate and moving play by Helen Edmundson.

An austere, black, metal structure partitions the length of The Globe’s stage between its dominating columns, hinting at the demure, ever-present convent walls. Against the richly detailed paintwork of The Globe and giant canvas prints of a religious painting I probably ought to know, it creates an ominous clash. It also blocks off the back of the stage and access around one of the pillars, but director John Dove and designer Michael Taylor have extended the thrust well into the audience to compensate. Though the set looked lovely and delicate despite its size, there is no need to cover and block off the back of the stage; it is a set in and of itself. Modifying the stage space, while able to give directors more freedom, alters the unique features of this playing space. In this case, the figure-of-eight path around the columns that supports conflict and tension is lost and the actors are placed deep into the round space. The actors are often stationary and so far forward that energy occasionally dips.

Nevertheless, all performances are excellent and, typical of Globe casts, the ensemble is close and completely in tune to each other. Naomi Frederick is a bold, confident Juana with the grounded calm of unwavering faith. Her reduction to a broken victim is heart rending. Her slave Juanita (Sophia Nomvete) provides wonderful comic relief though deliciously funny one-liners. The priests (Patrick Driver as Antonio, Anthony Howell as Bishop and Phil Whitchurch’s Archbishop) complement each other well, embodying distinct characters that capture the humanity behind the robes and inspire hatred from their treatment of Juana. Howell’s duplicity is unpredicted, creating a deeply conflicted character you love to hate. The only casting issue is a blatant lack of diversity. In a play set in Mexico with characters both native and Spanish, there is a glaring lack of Hispanic actors.

Heresy of Love premiered in 2012 at the RSC, but this is its first production in London. It is an accessible, relevant, gem of a play paying homage to Sor Juana, a genuine historical figure. These characters from the past with contemporary relevance are at home at The Globe and remind us that despite the progress we have made in women’s rights, there is still work to be done and we would do well to treat each other nicely along the way, despite any inner demons we battle.

Note: the performance reviewed was a preview.