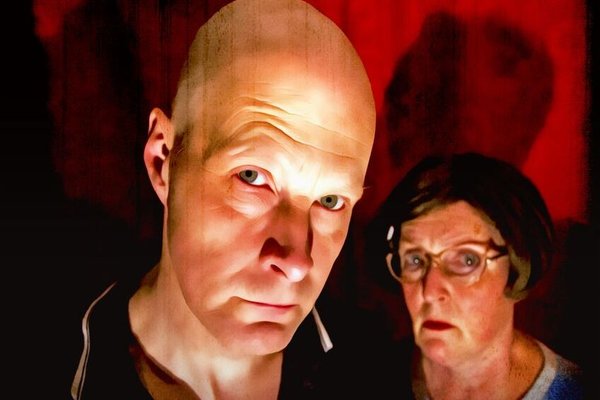 Any theatre festival programme is hit or miss if you aren’t familiar with individual shows or participating companies. So far, the productions I’ve seen at the London Horror Festival have ranged from ok to quite good, until Payne Killer. Lack of direction and a hackneyed story concept caused rushed, hammy performances and poor technical choices. There is also some awkward stage combat, no subtlety and a twist at the end ruined by the final moment. Phil Newman’s detailed set design helps provide some relief from the experience, as do a few moments in Rowan Dixon’s script that are probably quite funny if delivered well, but these two features aren’t enough to save the production from inflicting the horrors of bad theatre on its audience.

In a production that requires suspense, varied pace is a vital element, particularly at the beginning. The actors in this two-hander start off relentlessly, with no pauses to allow for phrasing or building up to the first major plot revelation. They tire and slow down just as things should be picking up, so they phone it in for the rest of the play. No director is credited so I assume that the two performers, also founders of producing company The Uplifters, self-directed – a mistake that could have easily been avoided and choosing otherwise would have had a hugely positive impact on the production. A director or a lighting designer could have also sorted out the cheesy lighting states during the characters’ reflective, confessional monologues that were also confusing and unnecessary: spotlights indicated soliloquies, but the other character could hear them and subsequently commented on the revealed information.

The set, a middle class, older woman’s living room, is unusually detailed for such a small theatre but fits the space well. Down to the newspaper holder and the trinket-filled bookcase, it creates the feel of a lived-in home that is well looked after, even if the furniture hasn’t been replaced since the 70s. It serves the production well, with only a slippery rug causing any interference to the actors.

Dixon’s script isn’t bad per se, but neither is it inventive or seemingly well researched. The characters are rather under-developed and cliched; something that research on serial killers may have helped. There are some nice moments, particularly when the two display some vulnerability, but due to the aforementioned performance issues these are glossed over.

A good production team, script rewrites and possible recasting might salvage Payne Killer, but The Uplifters may choose to move on and focus on the musicals they typically produce, which are familiar ground and probably better quality than their venture into horror theatre, a genre that should be scary for its content rather than its production values.