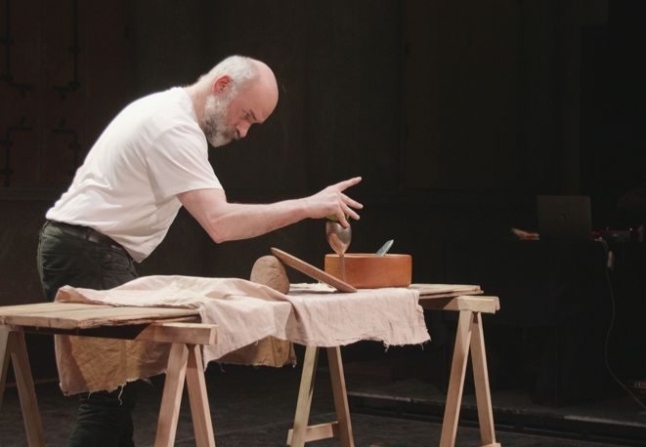 Director Jack McNamara promised very different performances for each part of Thibault Delferiere’s Spirit trilogy. Attending Lion, we begin to see what he means. Audience filter in to find a desolate Delferiere sitting in a cage. Food is once again dangling from the ceiling, but whereas in the first it was an innocent apple, here a large chunk of meat, tantalises Delferiere from above.

Like in the first part, Delferiere’s movement is accompanied by live music. This time it is London’s leading improvised drummer Steve Nobel’s turn to add his interpretation to Delferiere’s performance. Like Giuseppe Lomeo’s guitar from part one, Nobel’s drumming provides another delightful insight into the world of contemporary jazz and experimental music. He scratches, scrapes and pummels his drums to create a host of weird and wonderful sounds – this time aided by pre-recorded sound track that leads to a markedly different atmosphere from the first.

Encaged as he is, watching Delferiere perform in the opening sequences was not as enjoyable as in Camel. It is frustrating to watch him improvise within such a limited space and with a limited range of implements. Midway though however, he breaks free and begins to play with his wider world. Before long, he finds a sort of primitive statue of man carved out of wood. He lets out a child-like chuckle as he begins to toy – like a lion pawing at an animal – with the object. Eventually he noticed a teddy bear attached to the back. He takes it out and begins to nurture it.

In following Nietzsche’s journey of the spirit from burden to creative freedom,  Delferiere seems to have run up against a problem: he must be a lion that must make space for the final transformation into a baby. With that dictum wrapped around part two, the ideas begin to look a little bit too obvious as we watch the caged animal break free. The metaphorical erasure of the words that burden him from the first part and the eventual discovery of the child lead to part three.

That being said, Jack McNamara’s direction manages to build the atmosphere nicely with frequent lighting changes coupled with the eerie score making the spectator a happy, if slightly less-intrigued, participant.

The Spirit runs through 14 March.