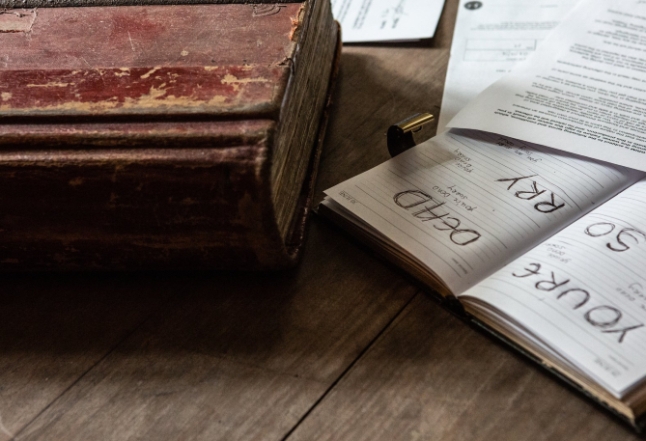 In a recent article, Nick Chater explains that the majority of people aren’t likely to rebel against tyrannical governments. Most of us are predisposed to follow rules, no matter how arbitrary they are. We might think that we would lead a revolution, but in all likelihood, most of us will do what we’re told.

This probably also applies to interactive and immersive theatre that feature audience agency. Provided we’re sober, we don’t want to give the actors and venue staff a hard time so we play by the rules and respect the creative team’s choices. Even if there’s room for audience rebellion within a narrative, I reckon many of us will toe the line despite finding that narrative completely abhorrent.

Yet this article, along with the lingering guilt resulting from my law-abiding choices afterwards, don’t feature in my thinking at the start of The Grim. A woman in a jaunty red jacket cheerfully informs me – and the other four people huddled in the doorway of a restaurant near the Vaults – that we’re dead. We’re in the Grey, a sort-of waiting room between the underworld and the living. She also tells us that – like the start of a new job or other momentous event – we need to do some admin. But the paperwork bit is short and built into the introduction to a self-led, promenade quest for a lost soul. If we’re successful, we get to live a bit longer – but there are other consequences that we don’t anticipate.

The stakes are high, but we’re here to enjoy ourselves. Armed with a clue, a password and some time, we head out in search of the first person who will help us. She is one of four womxn embodying various characters that may or may not also be dead.  They are all unsettling and entertaining, but in completely different ways – White Horse is a scatty academic, Black Horse’s mind flits between our conversation and somewhere else. Each scene is exact in its timing and formula, but each character is precisely realised and unique.

The design in each location is also detailed and specific, and the logistics of  organising the show are just as impressive. Though the rolling start times, with a new group starting every 20 minutes, mean its necessary for strict timings, the range of locations and the coordination of them is just as impressive as the story and the unexpected direction it takes.

But it’s only in the final scene that my group realises the true implications of what we’ve been tasked to do. Embarrassingly, we don’t put up much of a fight, either. As much as this show is well-crafted, clever and engaging, the message it leaves about our willingness to comply with a regime we totally – morally and ethically – disagree with is the most powerful element of the production.

The Grim runs through 16 February.