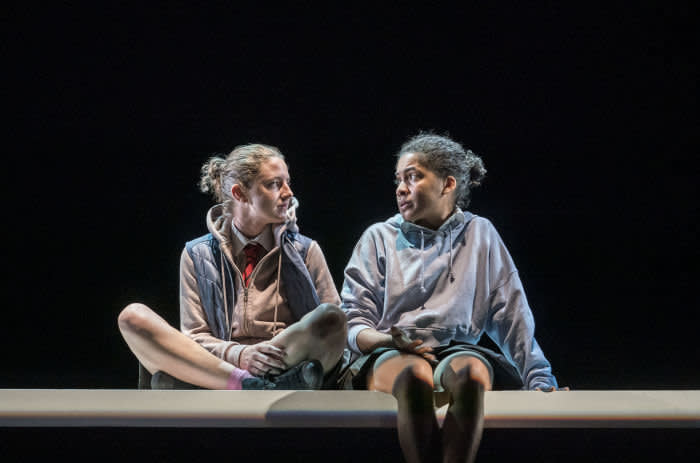 The first of the four plays, Glass, is a short series of episodes depicting the life of a teenage girl who is made out of literal glass. Like any child who is different from their peers, she is bullied. But similar to many girls, her older brother picks on her, and she fancies a boy. She also copes with her mum wrapping her in bubble wrap when she leaves the house, something that I’ve no doubt contemporary helicopter parents would do if it was socially acceptable. The glass girl’s fragility also needs to accompany resilience and good mental health, which culminates in a powerful metaphor for protecting our most vulnerable young people.

Churchill draws on classical stories in most of these short plays, with Kill being the most obvious. Casually sitting on a cloud, Tom Mothersdale embodies the deities of ancient Greece. Below him, a young boy colours and occasionally interjects in Mothersdale’s rapidly-delivered monologue that’s both a concise yet incomprehensible narration of the Greek myths. All of them. Without character names. Amidst the sea of interconnected plot points there are moments that are recognizable as parts of particular plays or stories, yet without a comprehensive knowledge of the classics, they blur into a monotonous tale of war, revenge and death.

Yet, that’s the point – it’s easy to reduce the whole of human history to destruction. With the future of humanity currently at a tipping point created by climate change and fascism, Kill‘s script could easily depict more recent times. It’s just so easy for the mind to drift during the story, though.

Bluebeard’s Friends has a similar effect early on, though in its addressing of how desensitized society has become to domestic violence and uxoricide, it eventually forces the audience to pay attention. Two middle-class adult couples, in scenes around a dinner table and with wine glasses in hand, consider the implications of another friend’s recent exposure as a serial killer. In this update of the Bluebeard folktale, the corpses of their friend’s six wives are discovered in their wedding dresses at his home. After their shock – which is mirrored in Miriam Buether’s design reveal – they cannot resist the capitalistic impulse to monetise the tragedy. Though it’s easy to condemn this reaction as too soon, it’s widely accepted that we profit out of other women’s deaths, like the tourism that’s sprung out of Jack the Ripper and his victims.

Churchill’s use of the grotesque and social critique is highly sophisticated in this play, though the audience hasn’t seem to have caught up. There are numerous moments where there is widespread, inappropriate laughter, like in Imp, where people find amusement at the politically-incorrect Boomerisms that pepper the last, and longest, of the four plays.

It is also the most realistic, and the most subtle. Dot and Jimmy are elderly, disabled cousins who live together to keep costs down. Dot struggles to contain her anger, and Jimmy goes on daily runs to keep his depression under control. They are frequently visited by their Irish niece Niamh and a local homeless man they befriended, but otherwise their days are small and quiet. The story eventually incorporates some of the devices that we rely on to get through life – namely faith, love, superstition. Rather than attacking them outright, Churchill simply reminds us of how they can interfere with our relationships. In this increasingly polarised world where Science is ignored and fear is foregrounded, it can be comforting to think a magical creature grants your wishes.

Dramaturgically, Churchill can be heavy-handed and in this quadruple bill, Kill is the most clumsy. Those who prefer naturalism will likely prefer Imp, though the message is much more hidden. For texts that are both innovative and angry, Glass and Bluebeard’s Friends tick the boxes but Glass is too short to properly get stuck into. As a body of work, the four plays complement each other well and offer a bold social commentary that is dark, foreboding and surreal.