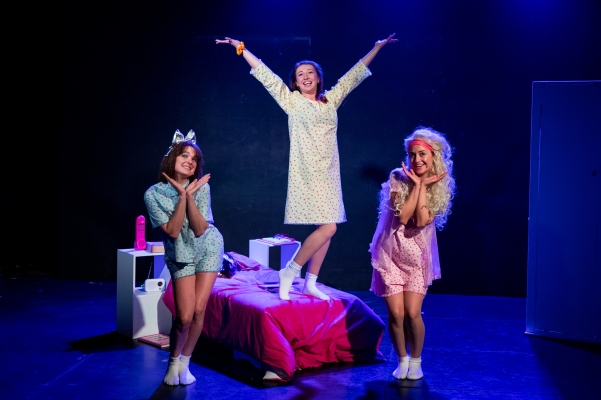 If you weren’t lucky enough to have spent your formative years playing the ‘90s Hasbro wonder that was DreamPhone, it might be worth having a quick Google before you see the show. There’s still more than enough to enjoy if you don’t, but there are some wickedly funny references that make this musical horror spoof even better for the initiated.

Three members of the self-styled high school clique the Beaver Babes are having a girly sleepover, but the threat that a killer may lurk somewhere in the American suburban home of chief mean girl Melody hovers over proceedings. Gifted a DreamPhone by her mother, Melody is pitched against her friends, geeky Stacey and skanky Janice, as they battle for the affections of an anonymous hottie. Along the way, the three belt out versions of ‘80s classics rewritten for the show with gloriously postmodern lyrics and hilarious choreography.

A true ensemble, the trio of women – Natasha Granger, Kerrie Thomason and Alexandra Lewis – are pitch perfect throughout; as perfectly in-sync with their harmonies and dance routines as they are with their impeccable comic timing. A vital piece of audience interaction is handled with brilliant control, with hilarious consequences for the plot, and the final twist ending is inspired.

Scream Phone is a gloriously fun, wonderfully camp pastiche that will have you screaming with laughter from start to grisly finish.