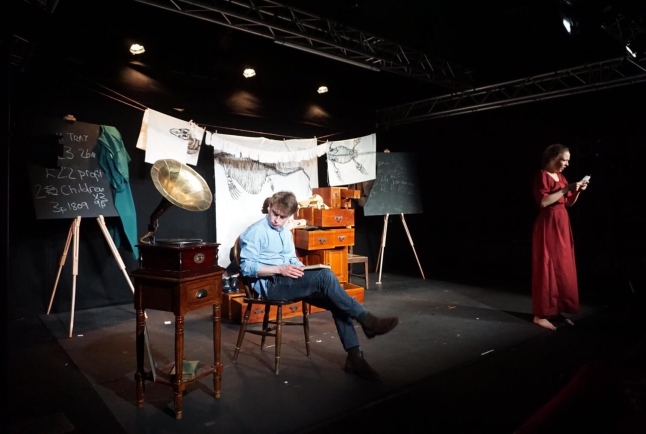 Mary Anning was a working class fossil hunter from Lyme Regis. She and her dad would sell their finds to the posh, Victorian collectors who wanted to horde artefacts without digging them out of the cliffs themselves. She became known as one of the best fossil hunters in the country, but her discoveries of new dinosaur species and their impact on science were, of course, attributed to wealthy men.  Now, about 200 years later, Mary’s tired of being ignored – so she hijacks a lecture about her work.

Though this type of narrative device is fairly common, it doesn’t work so well if it requires time travel. Mary lived in the early 1800s, and whilst I don’t doubt the ability of women’s rage to hang around this moral coil, her appearance in the present doesn’t quite work, especially considering that it’s a narrative device bookending a much more realistic narrative and performance style. Regardless, Helen Eastman’s script serves to educate audiences on Anning’s discoveries.

Anning’s unearthing of the first Ichthyosaur is monumental in the annals of science, but it is diminished in the face of her family’s poverty and misfortune. Her struggle to survive is at the forefront of the story, though it gradually gives way to anger at the aristocrats in faraway London who take, take, take from her and ignore her requests for inclusion in their fancy societies and institutions.

Antonia Weir is Mary, a sharp and intelligent young women who learned her place at the bottom of England’s social hierarchy at a very young age. Charlie Merriman and Emma MacLennan multi-role as all of the other characters, including her family, wealthy collectors and caring neighbours. Director Madeleine Skipsey handles the scene transitions well, though it’s not always clear from the outset who the supporting characters are in a given scene.

The dramaturgy is pretty rudimentary, but the value of this show is disseminating Mary Anning’s legacy and raising awareness of her work. Though the play could use some tweaking, it’s still a valuable reminder us of the women who were written out of history.

She Sells Sea Shells runs through 25 August in Edinburgh.