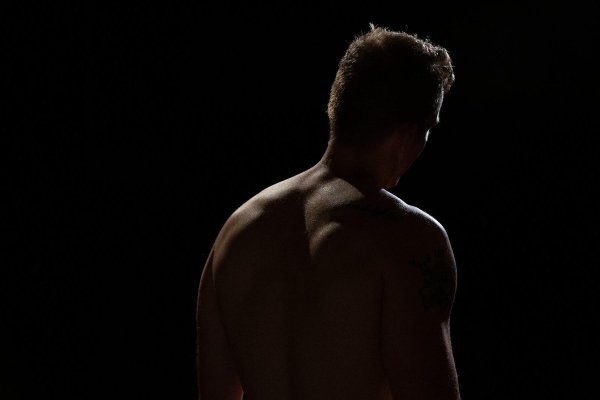 What makes some people obsess over fitness? That’s the question at the heart of Brawn, a new play written and performed by Christopher Wollaton under the direction of Matt Staite. At a lean 60-minute run time, Wollaton, alone on stage save a pair of dumbbells, tells the story of how his character, Ryan, came to be the impressive physical specimen he is today, and what he has had to give up to reach it. Part confessional, part social insight, part torture, Brawn is a wise, shocking look into the mind of one man who wants to get bigger.

Wollaton brims with charisma, not in the pageant sense – not just in the pageant sense – but also in the way that Richard Brody defines it as “a complex inner life that comes through in the time-sliver of a photograph and that […] rises with a silent wild music of conflicting dreams and desires.” Despite his character’s obsession with the exterior, the insistence that others see him as a masterful physical specimen, Wollaton is a shrewd communicator of the internal, of subtext. He presents a man in constant pain, wrestling with the paradox that the thing he thinks will make everything better is also the source of his anguish.

As a writer, likewise, Wollaton has produced an intense, slender story  – one hour, exactly – that never digresses or gives in to dramatic whimsy. Although Ryan is rooted in one spot, at one time, Brawn pulses with energy at some moments and rests on thoughtful insight at others.  Wollaton also demonstrates a keen ear for language; his Ryan speaks with a white, middle-class twang that is instantly familiar and utterly lifelike.

Some critical theorists have argued that one of the defining features of a liberal society is ‘entrepreneurship of the self’, a product of internalized capitalism wherein a person tries to maximize their value for the consumption of others. Psychologists write of body dysphoria, a breakdown of self-perception; sociologists point to the effects of media and fitness culture. Each of these theories could be applied to Ryan, who is desperate to prove his worth, who freaks out when he sees his reflection, who compares himself relentlessly to movie stars and action heroes.

As an investigation, Brawn doesn’t get to the bottom of the case, nor does it try to. Rather, it invites the audience to consider the pressures, internal and external, and the suffering, physical and mental, that some people experience when they look into a mirror, when they walk into a gym, when they lift up a dumbbell. Brawn is at its heart a play that demands compassion, and one that earns it.