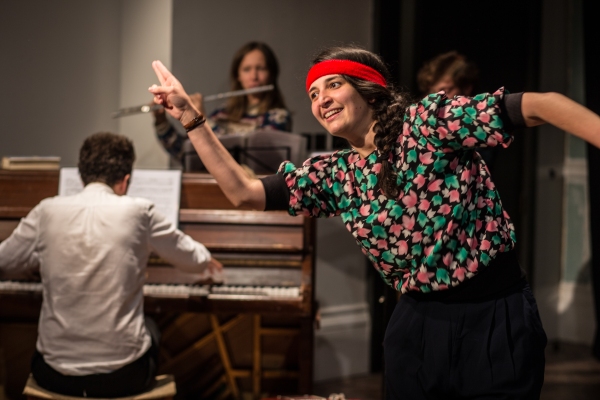 Born in 1913 in Koscice, Slovakia, Ján Ladislav Kalina was a man of theatre and art. He
lived the bohemian life that young people in Eastern Europe romanticise when they get lost in the works of Milan Kundera. Jan is Miriam’s grandfather, and in many ways his story, is that of my grandfather too. Miriam is a theatre-maker. Rendezvous in Bratislava is her ode to what’s lost and what’s remembered.

A young woman greets us in Slovak as we enter the auditorium. Transported into an
atmospheric eastern European cabaret like setting, we are offered Borovička as Miriam
takes us on a journey through time and space. Aided by two fantastic musicians and
entertainers, Thom Andrews and Will Gardner, and a bunch of rather talented Slovakian
musicians, Sherwood hosts an intimate yet celebratory evening full of jokes, songs and
beautiful memories. The stage is set up to resemble her grandparents’ Munich flat and the audience is encouraged to actively participate in the piece. I smile the whole way through.

Nostalgia overtakes me at times, but Miriam ensures that the piece provides
enough comic relief and never takes itself too seriously, avoiding the trap of self-indulgent theatre making. Sherwood’s comedy timing is brilliant and she is clearly familiar with that odd eastern European humour and style that so many could easily take a step too far.

The story of decades of occupation, not only physical and political occupation, but also as
polish poet Czeslaw Milosz often described as “occupation of the mind” (this is where you google him and buy his most famous work, The Captive Mind) is one so well known to me.

There is something extremely vulnerable and raw about the way Miriam tells us about her grandfather. Perhaps one of the most moving moments is that when, thanks to modern day technology and her own creativity, Sherwood exchanges words with her long-gone grandfather. How much of our elders do we carry with us without even knowing it?

I rarely leave the theatre feeling nostalgic. Usually nostalgia is reserved for those old memories wrapped up neatly somewhere at the bottom of all the yellow Polish autumns and crispy cold winters. But Rendezvous in Bratislava makes me think about my family and those who are no longer with us. It truly was a rendezvous with the past but also of the present, a love letter to beautiful culture and to those who made it.

Rendezvous in Bratislava runs through 24 November.