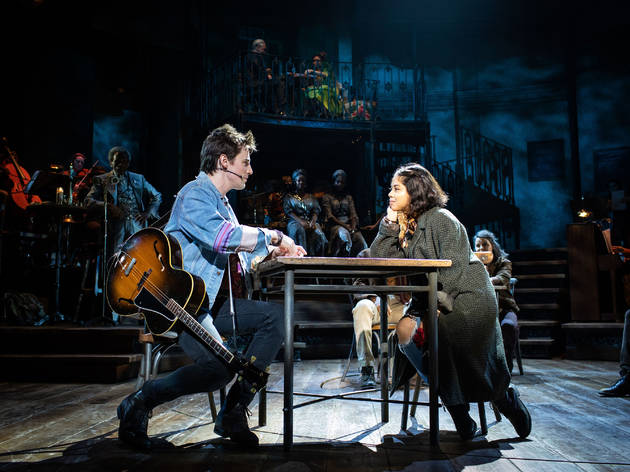 I don’t know the answer, but I continue to watch classical theatre in the hope that I’ll find it. Hadestown goes some way in tackling the problems in the Orpheus and Eurydice myth by giving it an unapologetic anti-capitalist message, but there are some troubling gender and poverty stereotypes that the story upholds.

Set in some backwater American railway town with nothing to do except leave, Hades steps in to solve the local poverty problem. The pinstripe-suited, velvet-voiced enigma builds an underground factory and promises his workers money, safety and shelter. They only thing they have to do is sign their lives away to him. His wife Persephone isn’t so keen on him or his work, but she happily spends his money. Those with no homes and empty bellies can’t resist his offer, as is the case with the young but worldly Eurydice.

She’s the pragmatist to her idealist musician lover Orpheus, who thinks he can solve the world’s ills if he can only finish his song. This is all well and good if you can afford the pay the rent and bills, but he can’t and doesn’t care. There’s a common relationship dynamic reflect in their pairing – optimist vs pessimist, idealism vs realism, logic vs whimsy. I reckon most couples will be able to see themselves reflected in these two to some extent, which helps emotionally engage us with their journey.

Though the love between Eurydice (Eva Noblezada) and Orpheus (Reeve Carney) is convincing and sweet, women who’ve dated tortured artists – and propped them up emotionally and financially – know this won’t end well for her. He’ll no doubt come out the other end with momentary heartbreak before convincing another woman that she too is unparalleled. She’ll lose everything.

The writing does little to acknowledge this. Instead it waxes poetically on Eurydice’s value as a muse to Orpheus’ artistic genius. It’s infuriatingly anti-feminist, and pans out EXACTLY as us older, more experienced straight women expect it to. When it becomes clear that Orpheus isn’t going to do anything useful to improve their situation, Eurydice eventually takes matters into her own hands. But desperation means she ends up being preyed on – a tragically recognisable pattern in cycles of abuse and poverty.

The design and dialogue also serves to romanticise a life of hard labour and low income. With the poor workers starting out wearing something more at home in a Dalston vegan coffee shop and Orpheus living unaffected by the cold and lack of food, it initially comes across as a lifestyle choice rather than ingrained, systemic oppression that is almost impossible to overcome. Fortunately this aesthetic somewhat dissipates as story progresses.

It gives way to a filthy, exhausting world of physical labour from which the workers can’t escape, but our genius musician boy finds a way to breach the supposedly impenetrable wall that Hades built around his underground empire. Though written before Trump’s reign of racist and xenophobic terror, references to Hades’ wall, supposedly erected to keep his workers safe, lead to inevitable comparison.

Though there are some thematic weaknesses in the book, the music is stunning. Folksy, blusey, poppy and undeniably catchy, it’s the first score since Hamilton to earn a place on my regular playlist. There’s so much heart and honesty that effectively captures the lovers’ affections and the hardship they endure.

Though rather different from Hamilton musically, the design in Hadestown has echoes of Hamilton’s sparse, wooden universality. Here we see a simply decorated bar overlooked by a balcony with a cigarette machine tucked away in a corner. Nearly every surface is lightly weathered wood that’s neither of the past nor the present. The revolve effectively gives the staging dynamism and drives the narrative forward. It also supports striking tableaux and the lengthy journeys Orpheus and Eurydice take to hell and back.

This is certainly a welcome contribution to London’s musical theatre. The excellent score and unrelenting criticism of corporate systems that enslave the poor in awful conditions and low pay give this show its value, along with the cast. But is this a radical, new show? Sadly, no. Gender tropes that oppress and victimise women are prominent and unchallenged and in 2018, that’s not good enough.