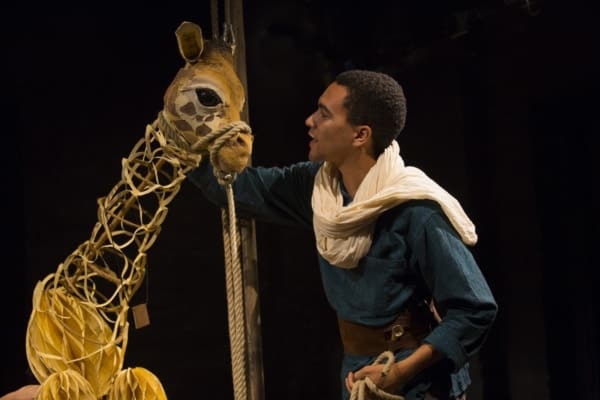 Atir is a young boy living in Egypt, working as a servant to The Pasha. When the ruler wants to send a gift of a baby giraffe to the King of France, he asks Atir to take her. An adventurous journey ensues as the pair make their way from Cairo to Paris in this surprisingly complex narrative for children.

However, what with the story’s opening describing the baby giraffe’s abduction from it’s parents, Zeraffa Giraffa has a dark beginning that seems like it’s going to address the wild animal trade. Disappointingly, the baby giraffe’s kidnapping doesn’t come with a moral. Instead, the focus shifts on her bonding with Atir. Whilst the pair have a great adventure and become best friends, Zerraffa’s origin story casts a lingering shadow.

Director Elgiva Field uses several types of puppetry and object manipulation, but the magnificent, life-sized baby giraffe designed by Matt Hutchinson is by far the best of the devices used. Little Zeraffa has great range of movement in her head and neck, and her front legs allow for the necessary wobbles and stumbles that indicate her youth. She is underused though, with a small toy giraffe standing in the rest of the time.

An overhead projector, of the sort that every classroom used to have before projectors and smart boards were the norm, is cleverly used to project a mythical character as well as provide location context – but it’s not positioned well. The actors often cut between the projector and the screen, casting large shadows across the projected image.

But despite a few shortcomings, it’s a sweet story with a good heart. Atir and Zeraffa’s journey has several obstacles across a long and complex journey, challenging the young audience to focus, but not overwhelming them. The range of visual devices and fun staging is totally engaging so with some dramaturgical tightening, this will be a fantastic piece of children’s theatre.