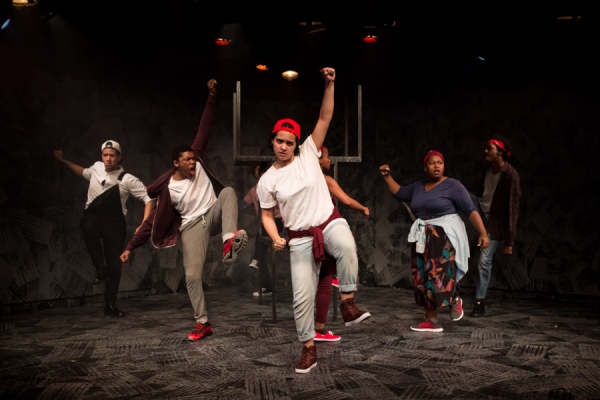 Oh Dionysus, as someone who grew up in Poland I really do miss political theatre. The real thing, you know? The thing that grabs you, makes you stand up and cheer for the performers. The thing that forces you to scream inside and ask yourself “Fuck, fuck, fuck, why are people so blind to this?” And by political theatre I do not mean Brexit plays or Donald Trump plays. I am talking about the kind of theatre that makes you question everything and makes you want to understand more. The kind of theatre that comes from the heart and the gut.

The Fall at The Royal Court (Jerwood Space), the touring show from the Republic of South Africa, is a prime example of what political theatre is. Following a successful run at this year’s Edinburgh Fringe this production, devised by seven drama school students from Cape Town University, is an insightful and truthful piece of theatre which tells the story of the recent student protests in Cape Town. Yet The Fall doesn’t just bring us closer to understanding #RhodesMustFall movement but also makes a strong political commentary on institutionalised racism, intersectional feminism and white privilege. It is simply a must see for everyone.

As Bassem Youssef, the Egyptian political satirist, said: revolution doesn’t happen in a day, it’s a process. This is exactly what the creators of The Fall are conveying in their moving and compelling piece. The physical act of removing the statue of a white British colonialist is not actually that hard, it’s what happens behind closed doors that takes courage and passion and it’s those behind these closed doors that have to pay the price for paving the way to change.

But it is not only words and textual richness that makes The Fall a thought provoking and humane piece. It is the use of live music that moves and shakes audiences in the right way as African tunes fill the auditorium of The Royal Court. Pride and unity is felt during the musical numbers as all of the seven performers bare their naked souls to the audience.

When one of the female characters, Camila, tells her male friend “It is not my job to teach you how you oppress me. The same way as it is not your job to teach a white man how he oppresses you” the whole auditorium of The Royal Court fills with cheers and screams. The truth is revealed and if you thought you were up for seeing some educational African theatre, you were wrong. The Fall is not just an educational piece of theatre, rooted deeply in truth and told from the perspective of real human beings; this production aims to awake those who have been asleep for far too long. It’s not the statue that is the problem but humanity itself.

The Fall runs through 14 October.