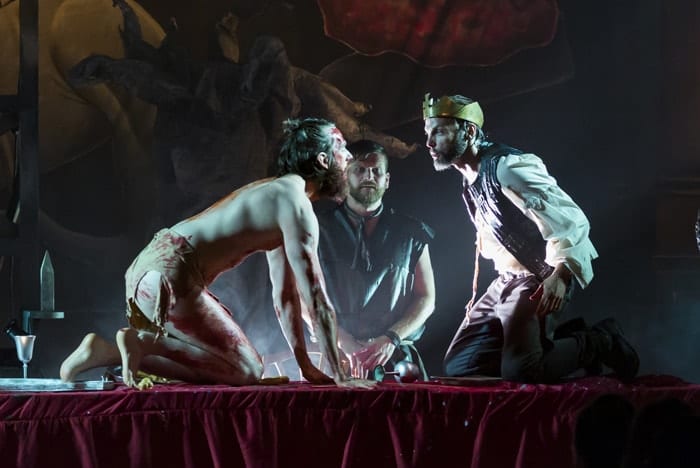 The problems with staging Shakespeare are twofold: Firstly, comprehension. The audience has to be helped to understand the language. The director has to assume that some of the audience will be coming to the play without being overly familiar with it.

Even if the audience understands that Macbeth is about somebody who murders the king and sees witches, they still want to grasp what is happening line to line and scene to scene. When a play stretches to over three hours, this can sometimes be a daunting task, for actors as well as directors. This means the actors have to understand the play and the language intimately, and the director must find ways to make the scenes as clear as possible.

The second problem is appealing to those who have seen a lot of Shakespeare, and are there to see a new take on a classic text. Forget about either of these audiences and the show will fail.

So, to Macbeth at the Actors’ Church – a promenade staging through the church grounds and into the building itself – a great idea, and one that makes great use of the dramatic church architecture. At one point the church bell rings whilst we are outside on the steps, which is genuinely spine-tingling.

However, there are issues with staging it this way. The show claims to be inspired by Hieronymus Bosch, and whilst still outside in the early evening light, the Bosch-inspired witch costumes unfortunately look ridiculous rather than terrifying.

The central performances from David Hywel Baynes and Mogali Masuku are passionate, full-throttle performances. Macbeth is wild-eyed, sent mad by the things he’s done and the terror of what might lie ahead. Lady Macbeth is both vicious and assured.

They work together terrifically well, and we ride alongside them in their descent into blood and murder. Yet in both actors’ performances there are lines that they skip past – lines that the actors themselves don’t seem to understand, and therefore have no meaning for the audience either.

The production benefits from some great performances, and some inspired design work throughout. The promenade staging is generally done well, and keeps the audience very much engaged all the way to the final scene.

However, the director has focused mostly on bringing his original take to the experienced Shakespeare crowd, and maybe forgotten a little about the line-by-line comprehension that is also essential to coaching a classic central performance from his Macbeths. The design also is not without flaws, and the opening of the show is seriously marred by those distracting-but-not-scary witches. There’s a huge amount of potential here though, and I wholly applaud the ambition running through the heart of this show.