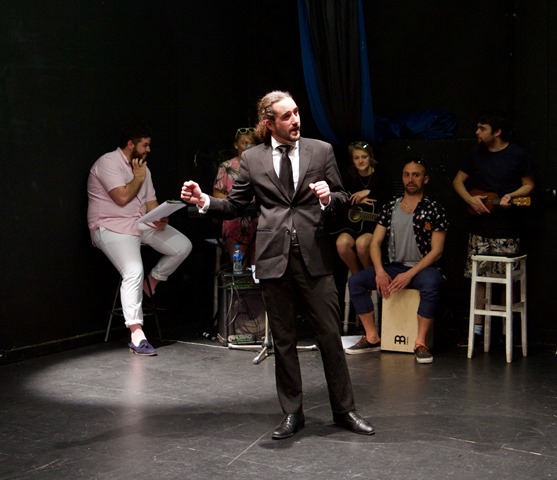 What with the prominent use of music in Twelfth Night, an actor-muso production is certainly a reasonable concept. Original Impact also sets the play in modern-day summertime, playing up the drunken frivolity at the forefront of the story. The recontextualisation largely works, though combined with some brutal editing, it glosses over the more sombre themes of grief and displacement. The cast demonstrate a range of ability with verse and performance skills, and there are some signs that the director isn’t familiar with Shakespeare. It’s not a terrible production by any means, but some minor adjustments would lend it a more professional feel.

Katie Turner as Viola is the highlight of the cast with her laddish Cesario who fully transforms her physicality into that of a bloke (and occasionally uses it as a mask that comedically slips). She is sassy, sharp and utterly fun to watch. Eve Niker as Olivia is just as strong a performer, giving the role a youthful and fresh take rather than aloof and cloistered. Dinos Psychogios makes Andrew Aguecheek a daft party kid but in touch with reality and down to earth – a great choice accessible to modern audiences. Sian Eleanor Green is a sweet Feste, but gets to show her talent more through multi-rolling as Antonio. James Morley as Sebastian matches Turner’s rudeboy demeanor and energy, making them a believable sibling pair. Timothy Weston is a good foil as the dour Malvolio, dressed in a black suit rather than beachwear.

Sam Dunstan directs. He has no Shakespeare listed in his credits, and his inexperience shows. There are several painful mispronunciations – Maria’s name being the most jarring – and some of the performers shred the verse to ribbons and shout their lines. This makes the pace choppy, and is further disrupted by lots of comedic business. Dunstan has a good sense for physical comedy and timing, but some of his choices don’t suit the text’s rhythm. There are also some clumsy transitions that further hinder the energy. Fortunately, the second half is more even and pacy than the first.

Shakespeare’s lyrics are swapped for contemporary pop songs, which helps bed in the update. The band is in one corner of the stage and constantly rotating, but to have the instruments manned at all times (even when they aren’t in use) pulls focus on the small stage. There are some great voices and instrumental skills on show, as well as some ace beatboxing from Andi Jashari.

The production’s a mixed bag. There’s solid reasoning behind the concept and some of the performances are strong, but it’s also proof that even a bit of experience directing or performing Shakespeare goes a long way. Listening to the verse and coaching actors to follow it makes a huge difference to a production’s professional veneer, even in fringe Shakespeare.

Twelfth Night runs through 6 May.