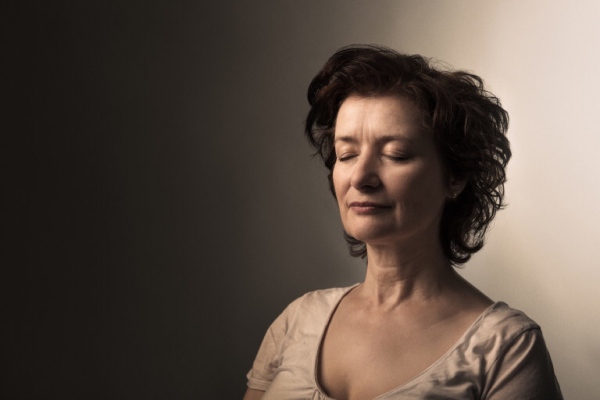 Mary Jane, Joe and their two teenagers, Maz and Kev, are happy. Even Mary Jane’s mum, confined to a wheelchair and trapped in her own mind by age and medication, is happily restful. Their lives aren’t perfect, but they love each other and relish their middle class, heteronormative, suburban existence. Joe’s a teacher, Mary Jane’s a tax inspector, Maz wants to study fashion and Kev is obsessed with video games. They are undeniably normal, until Mary Jane has a stroke whilst doing the ironing and the four of them are changed forever. Jo Clifford’s Every One, even with its nuclear family, takes a gently radical view of death through a metatheatrical structure that loosely parallels Everyman and thoroughly breaks hearts with the love this family has for each other.

Lengthy monologues by the five family members smash the fourth wall, creating an intimate space inclusive of the audience as well as each other. They immediately endear themselves to us with their personal anecdotes that set up the tiny, catastrophic fall that is the death of a daughter, wife and mother. Michael Fenton Stevens as Joe, Mary Jane’s husband, devastates us on witnessing the death of his wife and seemingly never ending grief. Mary Jane (Angela Clerkin) is so full of life both before and after her death. Her diminutive frame, alternatively longing for her family, whirling with joy and relishing a post-coital Saturday morning is so alive, making the impact of her passing all the more keenly felt. Nigel Barrett makes a wonderfully surprising appearance as Death, but he is a dapper, crush velvet-clad friendly chap who escorts Mary Jane to the underworld. Maybe death isn’t so bad, after all.

The set consists of a serious of wooden platforms at various heights that, with a smattering of potted plants, has a warm sense of life. Katherine Williams’ lighting design has a similar warmth, even in the underworld. The actors are constantly present on stage, further highlighting the bonds of this wonderful little family. Clifford wisely focus on the characters’ relationships rather than on Mary Jane’s death; she is very much alive to them one year after her passing.

Though Every One plucks at the heartstrings and leaves you wanting a cuddle from your nearest and dearest, it is just a shade too long. Two hours with no interval could easily be 90 minutes and still retain it’s impact. This is a script issue rather than one of pace. The pace and energy of the play is spot-on, to increase either would cause the production to lose its impact.

Every One takes a celebratory view of life and death, but doesn’t glamourise it. A recitation of causes of death around the world reiterates its normalcy but draws attention to the horror that is constantly occurring abuse, famine and terrorism. Death is all around us, and this fantastically performed family’s experience of it is both heartwarming and heartbreaking. This gentle interpretation of Jo Clifford’s 2010 play reminds us of our mortality but also calls on us to make the most of the time we have with those we love. Go see it, then tell your friends and family that you love them.