Mary Jane, Joe and their two teenagers, Maz and Kev, are happy. Even Mary Jane’s mum, confined to a wheelchair and trapped in her own mind by age and medication, is happily restful. Their lives aren’t perfect, but they love each other and relish their middle class, heteronormative, suburban existence. Joe’s a teacher, Mary Jane’s a tax inspector, Maz wants to study fashion and Kev is obsessed with video games. They are undeniably normal, until Mary Jane has a stroke whilst doing the ironing and the four of them are changed forever. Jo Clifford’s Every One, even with its nuclear family, takes a gently radical view of death through a metatheatrical structure that loosely parallels Everyman and thoroughly breaks hearts with the love this family has for each other.

Lengthy monologues by the five family members smash the fourth wall, creating an intimate space inclusive of the audience as well as each other. They immediately endear themselves to us with their personal anecdotes that set up the tiny, catastrophic fall that is the death of a daughter, wife and mother. Michael Fenton Stevens as Joe, Mary Jane’s husband, devastates us on witnessing the death of his wife and seemingly never ending grief. Mary Jane (Angela Clerkin) is so full of life both before and after her death. Her diminutive frame, alternatively longing for her family, whirling with joy and relishing a post-coital Saturday morning is so alive, making the impact of her passing all the more keenly felt. Nigel Barrett makes a wonderfully surprising appearance as Death, but he is a dapper, crush velvet-clad friendly chap who escorts Mary Jane to the underworld. Maybe death isn’t so bad, after all.

Director Chris Goode intuitively uses the space through a serious of wooden platforms at various heights that, with a smattering of potted plants, has a warm sense of life. Katherine Williams’ lighting design has a similar warmth, even in the underworld. The actors are constantly present on stage, further highlighting the bonds of this wonderful little family. Goode and Clifford wisely focus on the characters’ relationships rather than on Mary Jane’s death; she is very much alive to them one year after her passing.

Though Every One plucks at the heartstrings and leaves you wanting a cuddle from your nearest and dearest, it is just a shade too long. Two hours with no interval could easily be 90 minutes and still retain it’s impact. This is a script issue rather than one of pace. Goode’s nailed the pace and energy of the play, to increase either would cause the production to lose its impact.

Every One takes a celebratory view of life and death, but doesn’t glamourise it. A recitation of causes of death around the world reiterates its normalcy but draws attention to the horror that is constantly occurring abuse, famine and terrorism. Death is all around us, and this fantastically performed family’s experience of it is both heartwarming and heartbreaking. Chris Goode’s gentle interpretation of Jo Clifford’s 2010 play reminds us of our mortality but also calls on us to make the most of the time we have with those we love. Go see it, then tell your friends and family that you love them. 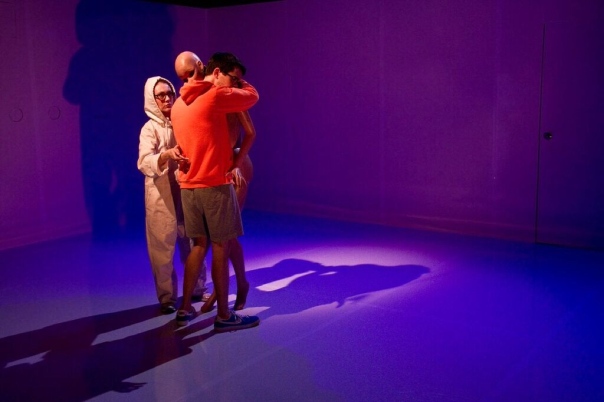 I’ve never seen any theatre from New Zealand before All Your Wants + Needs Fulfilled Forever. Compared to British theatre, how similar or different would a show be from a company that has never worked in the UK? What themes and styles are classed as “innovative and imaginative” down there? Would the work have the same aesthetic that British fringe theatre has developed, and would it be to a British audience’s taste?

All Your Wants + Needs Fulfilled Forever bears some resemblance to British progressive theatre, but in other areas, there is clear difference. With a plot showing influence by “The Trueman Show”, “Inception” and other films that present a reality controlled by unseen, powerful individuals, it has a plot that I could easily imagine from a number of UK fringe theatre companies, but the major difference is that the production is slick. Like, REALLY slick. It doesn’t look or feel like fringe theatre. Eli Kent’s dystopian script is layered, has a perfectly formed dramatic arc and a balanced use of humour and pathos. Other than a slight excess of vague plot points, this is a provocative, progressive play that British fringe theatre could learn a lot from.

Simon (played by playwright Kent) recently lost his dad and is struggling to cope. A disembodied voice/robot/computer that we never see who has a trio of technicians at its disposal intervene to create a better narrative for Simon. The audience’s view is from backstage – rather than seeing Simon’s engineered world from his perspective, we see a blinding white box framed by microphones, computers, sound desks and random props that Joel Baxendale, Victoria Abbott and Hamish Parkinson (playing themselves) use to construct reality. It’s a unique perspective, and one that takes some time to adjust to. A toy gorilla is Simon’s stoner best mate, his mum is a pair of pink marigolds, and his girlfriend Alice is a mannequin that’s seen better days. All’s ticking along just fine, even with some glitches, until Simon’s free will trumps the science that attempted to control his life.

Live sound mixing is used more effectively in this play than in any others where I’ve seen it used. It fits this metatheatrical world to a T rather than trying to be invisible or be something it’s not. Marcus Mcshane’s lighting takes advantage of the smart lighting rig, adding mood and colour to the white cube that Simon functions in. The mid-1990’s costumes by Lizzie Morris juxtapose the contemporary tech and highlight the awkwardness of the characters and their inability to fit in. It all blends seamlessly with the storyline and no design elements dwarfs the others.

Clearly one of the factors of this show’s success is its funding. This isn’t a large scale show at all, but the tech and specially made set with its windows and flaps in just the right positions for the action won’t have come cheap. R&D wouldn’t have been short, either. Though fringe in spirit, All Your Wants + Needs Fulfilled Forever is definitely not fringe in appearance. If small scale theatre in the UK had more funding, this level of work would be much more common on the fringe: sophisticated, progressive scripts with a well-rehearsed cast and enough design to create a fully formed world rather than the predictable minimalism that restricts ideas to the familiar domesticity of a few tables and chairs.

This ninth production from The Playground Collective has been running off and on since 2014 so the cast have great chemistry and there are no apparent mistakes with any of the tech. No doubt the long run also plays a part in the polish of the show, but this is something that is also not possible without financial backing. Though thematically just as progressive as some of the small-scale British touring companies (Theatre Ad Infinitum’s Light is a strong parallel), it’s an excellent show that proves the potential of fringe theatre if it had access to decent levels of funding.