Bill Clinton once told Kevin Spacey that 99% of political thriller ‘House of Cards’ is real – a terrifying thought. Whether true or not, Spacey’s character Frank Underwood has clear parallels with Shakespeare’s Richard III what with the former’s ruthless climb to the US presidency. New company Godot’s Watch picked up on the similarity between the two rulers, taking inspiration from the tv series for their small-scale update to Shakespeare’s popular history play. Though the production has some canny choices, the concept comes across as a generic modern-dress adaptation with some pronounced weaknesses.

END_OF_DOCUMENT_TOKEN_TO_BE_REPLACED

With Halloween becoming more and more popular this side of the pond, horror theatre and live events are proliferating. The London Horror Festival is bigger than ever, new scare attractions appear all over the country every year and independent events like Frissonic’s Howl expand the otherworldly and terrifying offers for thrill seekers this time of year. A site specific, immersive performance for an audience of six, Howl is a considered, effective performance that induces plenty of jumps. Though the story of a disappeared sister and mysterious voices is patchy, it is well delivered, and combines audience manipulation with technology to create a delightfully creepy event.

The choice of a small audience generates fear from the beginning – there is less protection with fewer people, particularly when paranormal investigator Rory places us on isolated chairs around a large, long-abandoned storage room. We are there to help Rory look into a something he heard when he was recently alone in the theatre, and we use sound to try evoke it again. Wireless headphones, increasing pace and anxiety, and customised audio content create heavy tension and uncertainly ripe for scares.

The ending in a different room is too rushed and betrayed by the lack of a full blackout. Though there is a clear resolution, the reasoning leading up to that point is never fully explained. How does this voice connect to Rory’s sister who disappeared all those years ago? How did we find him and decide we want to help? Rory is very much a character of the present, but frustratingly little of his past is revealed.

Frissonic nail the scares in Howl with their tech and small-audience approach, but adding flesh to the skeletal story will hugely improve it. Currently running at 40 minutes, another 15 or 20 minutes of text will make this feel more theatrical and less reliant on the scares.

Maybe the witch in Snow White isn’t that bad. Or, maybe her badness is justified, like she had a traumatic childhood or suffers from a mental illness. Siobhan McMillan proposes just that: Shivvers realizes she’s past her prime and, with insecurity taking over rational thought, she decides to hunt down the young woman who dethroned her from her position as the fairest in the land. This quest takes shape as a solo performance told in the third person, like a fairytale. McMillan regularly interjects with contemporary references and using sarcastic humour to great advantage, makes a strong comment on women’s insecurity about aging.

The use of third person narration is one of the more interesting features of Mirrors; it distances McMillan from the audience and herself. Her physicality and energy cannot be denied as she embodies the characters she simultaneously describes. The audience is told her story but has plenty to watch, and a liberal use of sound and vocal effects create a dynamic aural landscape, even if a touch too loud at times.

The use of an occasional live feed adds another visual layer by which the audience scrutinises Shivvers, but a backlight interferes. The intention shows good instinct by director Jesse Raiment. The set isn’t particularly dyanmic with its black flats and mirrors, save for the ornate frame mounted on a table centre stage – a symbol of modern obsession with female appearance and its dominance in Shivver’s life.

This feminist solo show is an excellent display of performance storytelling and a witty comment on modern life as a woman. Not just about aging, it also looks at female competition, the need to be desired and the perils of dating. With the opportunity of a longer run, Mirrors could upgrade its tech and design to create a more polished production matching its content, creating a piece great for touring small to mid-scale venues. 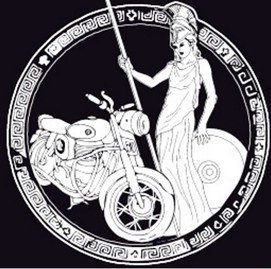 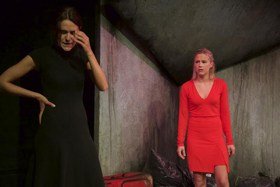 wo estranged sisters dig through a rubbish tip after their mother’s funeral. Recovering heroin addict Becky, in a moment of anger, had thrown away an unopened letter from their mother containing important information. Older, responsible Diane insisted they recover it, so here they are in their funereal finery, ankle deep in trash, full of hatred, resentment and grief. New company Indigo Iris, founded by actor-producers Emma Shenkman and Georgina Philipps, debut with Arthur M. Jolly’s Trash, a two-hander with potential for absurd situation comedy that instead plays it straight, focusing on the complexity of sisterhood and familial responsibility.

Trash is a well-constructed play driven by long-standing conflict between Diane (Emma Shenkman) and Becky (Georgina Philipps). Their mother’s illness tested daughterly obligation: Diane fulfilled it, but Becky refused to and ran away. They haven’t seen each other since. Diane’s resentment spews forth in relentless verbal attacks that Becky coldly thwarts. Occasionally, the violence turns physical, with great fight direction by Gordon Kemp.

This is a tense, wordy production but the energy is full on, particularly from Shenkman. Her vicious, relentless performance counters Philipps’ low-key character and keeps the audience’s attention. Both have a hard veneer that rarely cracks and is truthful to their situation, though more emotional range would have been welcome to break up the near constant anger. As such, sympathy for either woman is difficult to summon, even though Becky doesn’t seem to by lying about being clean and Diane clearly had more than her share of trouble caring for their dying mother over the last three years. The script steers clear of a formulaic narrative arc but still satisfies through a gradual information reveal and an ending open to several possible outcomes. It’s not a happy ending, but not a stalemate either and avoids sentimentality. These women are damaged, and it will take much more than an hour in a dump together to repair their relationship.

The set design is simple but effective. Filled bin bags and a load of other stuff cover the stage, with a backdrop of an ominous gray envelope. Its ever-present dominance is a powerful signifier of the control their mother still has over them in her last attempt at communicating with Becky before her death.

This would make a good touring studio production due to its universal conflict and small scale. Indigo Iris have good instinct for choosing a well written, showcase production. Hopefully they’ll continue their producing journey with more plays less familiar to the London fringe that focused on character relationships through solid, well-crafted scripts.