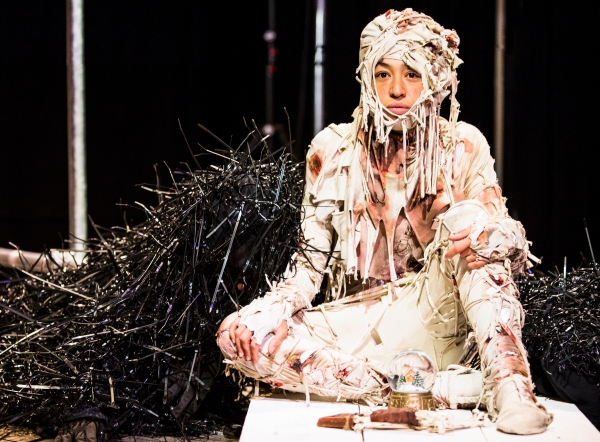 In a former ambulance depot in Tottenham Hale, Philip Ridley’s latest creation comes to life. This epic parallel world of wholly isolated nation states resembles the worst dystopias imaginable in contemporary fiction. Mareka is a 1950s America with laws enforced to the letter by the Grand Marshall, everyone wears pink, and milkshakes are consumed with religious zeal. Cotna is the future, where people are have numbers instead of names, and watching meteor showers without protective eyewear causes you to hear voices. Then, there’s a community of exiles in the mountains, living in caves, wearing skins, and praying to pre-Christian gods. A storyteller/historian in yet another time and place documents these people and their trials.

These kingdoms have a lot of detail, and a lot of emptiness. The story sprawls over three hours, zipping back and forth across time and place, leaving a swirl of slow understanding, further questions and obvious metaphor in its wake. The text is rich and beautiful, fragmentary and challenging, but it’s only partially reinforced by design. A scaffolding base reveals occasional moments of visual detail, but they generally pale against the language. Karagula is equally marvelous and horrible, an experience for all the senses with stories that enthrall and disturb in equal measure. But Ridley’s Tolkien-esque ambition never reaches its full structural potential.

Individual scenes are just as likely to delight as they are to be forgotten. If Karagula was a tapestry, it would be patchy and moth-eaten in some areas, others would have exquisite embroidery, and still others would be completely plain and ill-fitting. The gaping plot holes leave room for interpretation, but the better scenes feel all the more out of place. Ridley either needs to pare the script right back, or add another couple of hours to join up these worlds more fully. The whole experience is equally delightful and frustrating.

Nine actors play all roles in some exemplary multi-rolling. Producing company PigDog is committed to diversity in casting and audiences, and this cast is admirably so. Obi Abili is a terrifying brutal Grand Marshall in Mareka. Emily Forbes is the fiery leader of the mountain outcasts, initially motherly, then ruthless. Lynette Clarke is similarly versatile, as a flamboyant and vicious Marekan and a cold number in Cotna. None of the ensemble ever let their energy drop; their work is just as fantastic as Ridley’s best scenes.

Director Max Barton approaches the text with clear vision and choices that aid clarity, even in the muddiest sections of text. Designer Shawn Soh has moments of brilliance (beasts with coats of cable ties and a throne of gears and propellers for the narrator are fantastic surprises), but the shoestring budget is noticeable in the inconsistent application of detail.

Despite it’s issues, Karagula packs an emotional punch with social commentary and nihilistic fortune telling. Mareka foreshadows a Trump-led America, and Cotna is a land where technology has ushered in the loss of individualism. There are moments of wonder and horror, and sheer bafflement. Philip Ridley’s vision is commendable, but the execution isn’t quite there, leaving the audience partially sighted. It’s a wondrously alive and human production and like any given human being, it has it its faults and its virtues. 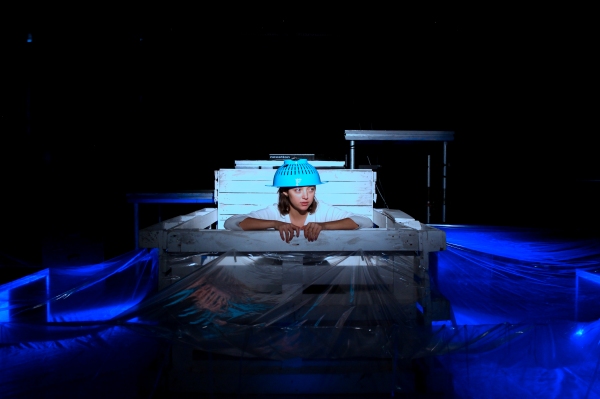 A lot of firsts are happening in Balham theatre at the moment. Theatre N16 has moved from N16 to a new home in SW12, The Bedford Pub. There is little theatre in the immediate area – Tooting Arts Club is further down the Northern line, Clapham and Stockwell both have venues closer to town, BAC is a bit of a trek and there’s a new theatre tentatively in the works in Streatham, but that’s it. Their inaugural production in their new home is first play Boat by poet Kiran Millwood Hargrave; it’s also producer PIGDOG’s debut production. Hargrave’s text uses thickly layered metaphor to tell 14-year-old Girl’s experience of human trafficking. What starts off as an interactive, childlike show soon reveals the sickening underbelly of cities and towns around the world.

“Jellyfish of Sound” Jethro Cooke opens by asking the audience to create some effects that he proceeds to use with others through live mixing. This beginning should indicate that sound is a dominant feature throughout, but it only appears sporadically, and quietly, for the rest of the performance. Instead, the focus is on the story of Girl (Pia Laborde Noguez), on a Beckettian journey with no apparent beginning or end. She is 14, on a small drifting boat. Her Twin (Cristina Catalina) is with her and she keeps herself entertained with visits from the increasingly possessive Turtle (Matthew Coulton) and challenging Gull (Grabriele Lombardo). As Twin’s appearances become more rare, and Girl measures times in the phases of the moon and plans adventures with Gull to find the moon on the seabed, her boat of white pallets and surrounding sea of plastic sheeting abruptly collapses, transforming into a bedroom. Twin, unspeaking and inert, lays draped across the headboard with clay covering her face. Only the clay represents something else, as do Turtle and Gull, and oh god, the realization of her actual reality is horrifying. Girl reminds us that we can pretend none of this happens in the world, as “you believe what you want to believe” and traumatized people will construct an alternative reality in their heads as an escape, but that doesn’t make sex trafficking, child prostitution and refugees cease to exist.

Hargrave’s language is naturally that of a poet’s, but the transitions are abrupt and obvious, announced by the Jellyfish of Sound. The upstairs space in the Bedford is versatile and a good size, but the low ceilings challenge conventional lighting. As potent as the play’s message is, the script imbeds the real story so deeply that it’s easy to take it at face value, or transpose it onto the refugee boats that fill our oceans and our news. But to do so leaves large, logical holes in their world and dilutes its potency. Though a worthy first production, it feels a bit rough around the edges with some moments of vague writing despite good performances. PIGDOG and N16 clearly have great ideas, and this is a wonderful space to explore and develop them in.