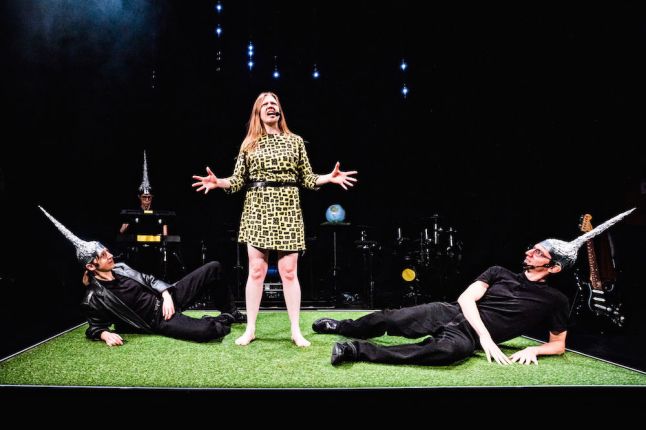 Welcome to the present, where we’re listening to a gig-theatre/TED Talk about the future. Specifically, Little Bulb have drawn on research from the finest minds in science, mathematics and philosophy to look at the potential of Artificial Intelligence (AI) and the impact it could have on us. Will it lead to utopia for the human race, or will we be driven to extinction?

END_OF_DOCUMENT_TOKEN_TO_BE_REPLACED

On 13th March last year, I couldn’t tear myself away from twitter as news of the Battersea Arts Centre fire spread. The night before, I had taken my school’s GCSE Drama students to see Gecko’s Missing. The students had never seen abstract, physical theatre before and though they had mixed reactions, they talked about it for days afterwards and drew on it as they devised their own physical theatre pieces. As someone twice their age who is drama school trained and a seasoned theatregoer, I still rely on the BAC to foster similar reactions in myself. Whilst there are certainly shows that aren’t to my taste, the venue has consistently expanded my knowledge and understanding of the theatre and performance.  To watch the fire unfold in real time over social media was devastating. Thankfully no one was hurt and I’m certain those that work/have worked there were affected much more than I was, but I thought I was losing a chunk of my own theatrical landscape.

As the news broke that the BAC would open the front part of the building the next day, my heart leapt to know that all was not lost. The resourcefulness, determination and camaraderie of theatre people pulled together to reopen and raise funds. Now, a bit more than a year later, parts of the building closed by the fire are reopening. First were the artists’ bedrooms, now the remarkable, new open-air space, The Courtyard, debuts with Little Bulb’s similarly spirited show, Extravaganza Macabre. Spunky, bouncy and full of heart, this Victorian melodrama with heaps of music, audience interaction, and unadulterated love for their work makes for a delightful opening of the new BAC performance space.

The complete lack of hipster irony makes this show a rare treat. Though heavily stylized with narration and over-the-top performances, the trio of performers fully commit to it rather than commenting on it from a distance. Daylight, fluid actor/audience boundaries and interaction wholly engages the audience with the story, and the reasonably complex structure that never fails to surprise. Songs, narration and scenes alternate and incorporate plenty of slapstick; these combined with the casual outdoor environment makes a fantastic example of popular theatre also suitable for family audiences.

None of the three performers can be singled out as weaker than the others. They are multi-talented actor musicians brimming with infectious joy and exuberance. They fearlessly throw themselves around the ground floor and the gallery, down stairs and trap doors. Their use of space and inclusion of the whole audience regardless of what level they were on is fantastic – no one feels left out, and every bit of the Courtyard is utilised.

The script they created is a bit convoluted, but the narration clearly signposts changes in time and location, as does their multi-rolling. It’s complex enough that adults won’t be bored, but young people in the audience enjoy the warm silliness of the physical comedy within the story. A storm is the catalyst for the separation of a family and an unrelated young couple, all of whom endure much peril and crossed paths in order for everything to be right again. There’s love, violence, grief and death, all of which are treated with extravagance and utmost importance. There are still peaks and troughs in the plot and the emotional range is varied enough that, even though overly exaggerated, doesn’t become mundane.

Both the BAC and Little Bulb display immense passion for their work, and the two marry perfectly to inaugurate the courtyard. Warmth and energy and love radiate from Extravaganza Macabre, and a heavy dose of innocent goofiness makes this production truly something special.