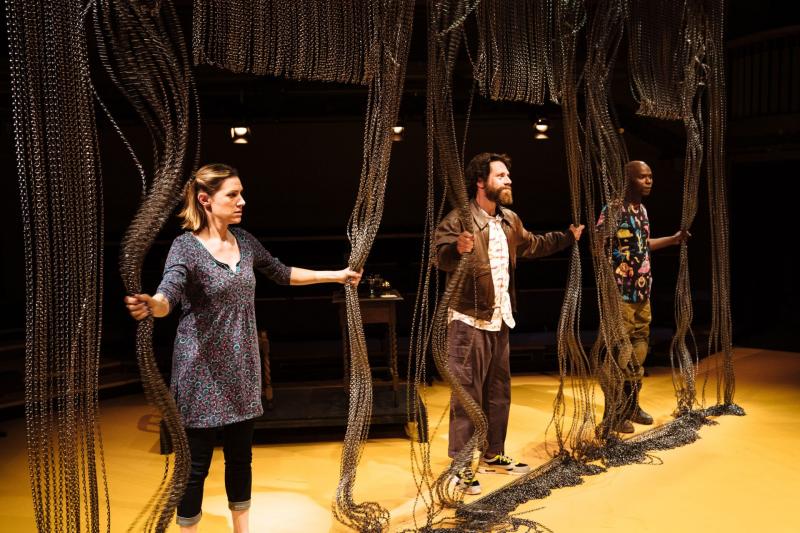 In his first production as Artistic Director of Actors Touring Company, Matthew Xia brings this unique story to the Orange Tree Theatre in a new production. Written by Maya Arad Yasur, this play provides a brilliant perspective on the atrocities that took place during World War II, and how these acts spill over into and still impact the lives of those living in present-day Amsterdam.

Through freestyle storytelling, five actors recount how one Jewish American woman comes to find out how a €1700 gas bill has made its way under her door. But this gas bill represents so much more than forgotten utilities payments. It holds an entire story of heartache and bravery that takes place in her apartment, from a time that was so different to the life she lives now – and yet it’s recognisable, uncannily calibrated in much the same way as her life.

The cast is sensational, and their ability to swiftly move from character to character, to mould and work together as an ensemble is lovely to watch. Particular stand-outs include Michal Horowicz in her staunch empathy with our protagonist, and Fiston Barek with his playful and often hilarious nature bringing relief in the moments we need them most. It is evident that Xia has staged this piece with great care, as the writing leaps off the page and right into our laps. He uses the space well; although the piece is intimate, the audience never feel unsafe or anxious about being so close to the action.

Amsterdam is a play that deserves to run for years. It personalises and articulates the horrific treatment of Jewish people during World War II whilst always keeping one foot in the present, which more often than not, is one of the show’s most powerful features.

Amsterdam runs through 12 October in London.