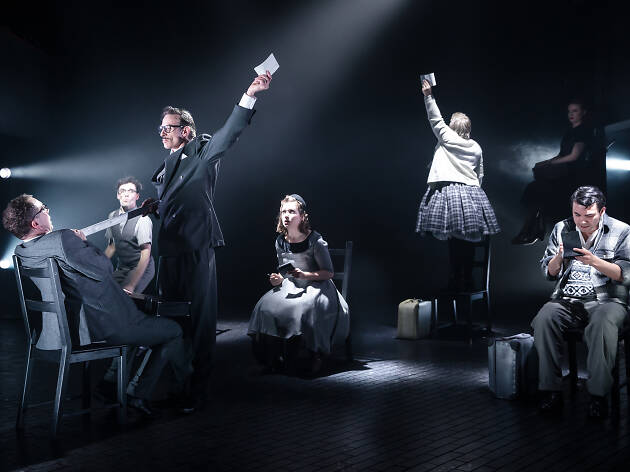 Post-World War II, the city of Paris is putting itself back together. People go to work, people get married, people get by. Monsieur Dusoleil (Gary Tushaw) epitomises this attitude, working harder than the other clerks in the office, and yet, he feels the sting of loneliness. Amongst the other tortured, Parisian souls is Isabelle (Anna O’Byrne), a woman married off much too young and trapped by a much older man, known simply as the Prosector (Alasdair Harvey).

In these many humdrum moments, Dusoleil finds a moment of magic. After a freak power outage he has discovered a new power. He can walk through walls. Following the classic Robin Hood trope, he steals from the rich and gives to the poor, giving the people of Paris something exciting to live for.

The show is quirky, lovely, and completely self-aware. The comedy is quick and clever and often written into the score easily, with the highly energised cast bringing these moments to fruition. Musically, the show soars and Michel Legrand’s score is in good hands with the brilliant band and Musical Director Jordan Li-Smith.

The cast is wonderful, and Director Hannah Chissick brings their world to life beautifully. The staging and set are gorgeous, with atmosphere created in large part by Rob Halliday’s lighting design. The moveable lamp post is the perfect set piece, and chairs are used inventively throughout the show, serving as anything from tables, to buses, to desks. It’s a nice touch.

The actors are incredibly skilled, giving performances that are intentioned and hilarious. In particular, Elisa Churchill as Madelaine and Steven Serlin as the Boss (his wordy solo song is a mouthful that he gets through effortlessly) provide well-rounded, detailed characters that stand out from the ensemble on a number of occasions. Keith Ramsay as the Painter is fantastic as well, and Gary Tushaw leads the show as Dusoleil with such a gentle and exciting demeanour it is impossible to not like him. Anna O’Byrne does the best she can with Isabelle, and brings a new strength to the classic “damsel in distress” character.

The show’s strange ending is almost fitting for this musical fantasy, as the story moves into some odd places. But it is the commitment from the cast that keeps the audience onside and engaged, as well as helping us suspend our disbelief for some moments that could possibly be seen as a little cheesy anywhere else.

Amour runs at Charing Cross Theatre in London through 20 July.