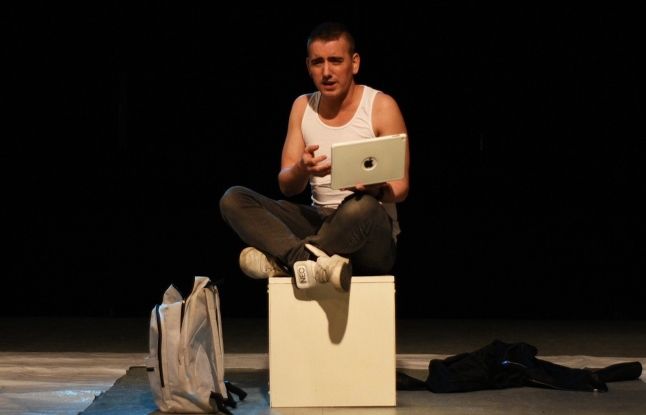 Tyler had been living a life familiar to many new Londoners – frustratedly waiting tables whilst hoping for excitement and success that would make his mum proud. Then, a night out in Soho inspired him to give up one kind of service for another, and he’s now loving his work as an escort. The men, the money and the sex make an equation that’s irresistible and thrilling, but not without risk.

Dan Ireland-Reeves plays a cheeky chappy who’s up for anything, which is a helpful trait when people pay you for sex and companionship. He cheerfully recounts his regular clients and the ritual of preparing for work, with a lovely motif emerging around his rucksack. He is candid and charming without being unnecessarily explicit, with his casual chatter leading to one particular night that epitomises the job’s danger.

The script is skilful in its sneaky transition from a series of lighthearted anecdotes to something significantly more sinister. It’s capacity to surprise is unsettling and consequently, upsetting. It’s easy to see how the underbelly of any big city is appealing, but also a place where people can easily disappear.

Tyler’s talk is youthfully honest and fragile, but the heart of the story warrants trigger warnings. Sexual violence is a prominent theme and whilst it forms a truthful core of this narrative, it could potentially traumatise audiences. There’s a lot of good in this production though, from well-crafted storytelling to an engaging performance, and a particularly chilling warning to those who meet strangers for sex.