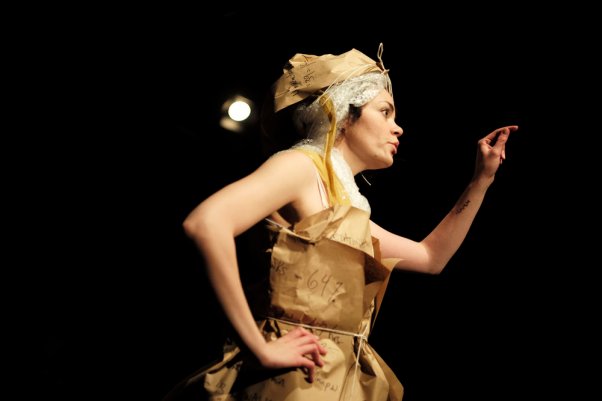 I contemplate a ratty t-shirt displayed on a podium alongside several other seemingly random items. I’m asked to write down how much I would pay for it. Determining it’s not something I’d wear or have any other use for, I wrote £0 on a slip of paper that I slid into a box behind it.

An hour later, I know the context of the t-shirt and its importance to the performer behind this display, but I’m still surprised by the reveal of the t-shirt’s monetary value. I’ve also heard the backstories of all the other items and the process of developing the formula that attempts to determine how much these relics from relationships past are actually worth. Writer/performer Haley McGee makes the mathematical discussion engaging, and rather than a lecture, we see an increasingly frantic quest for meaning in these left-behind items and gifts. It’s a refreshing and necessary take on singledom.

Initially driven by the need for cash and the realisation that everything she owned of any value were gifts from her exes, she consulted mathematician Melanie Phillips to help her work out what she might be able to make from these objects when factoring in their full story. Data points are generated from information like the length of the relationship, how good the sex was, who ended it and how much time was spent fighting. McGee’s reflection on her past relationships inevitably triggers a lot of pondering in the audience, which makes for a surprisingly cathartic experience.

There’s some light audience interaction, but McGee is respectful of personal boundaries and there’s a clear awareness of the sensitive nature of her show. She injects a good amount of comedy, which makes the moments of vulnerability have even more impact.

This is an intimate work that draws on numerous techniques that both move and surprise, and the effect is one of warmth and care. It’s a fitting homage to the ones we’ve loved and lost, and to those of us who bear the costs of heartbreak.