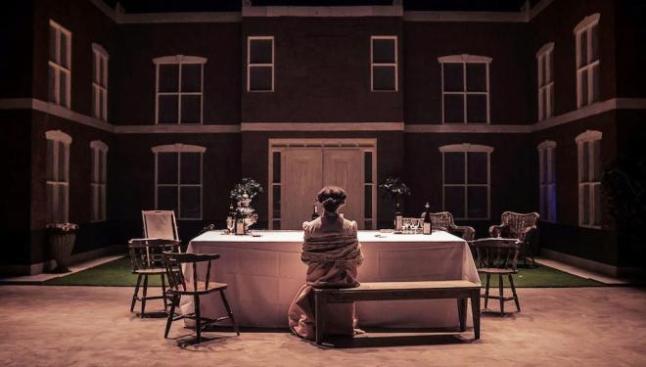 In Chekhov’s first play, there is a gun, discussion of property, longing for the past and idly passing time with friends and family. There’s also a takeaway delivery driver, a flaming wrecking ball and people in their pants.

Dead Centre’s hypothesis of teenaged Chekhov’s first attempt at script writing starts off predictable enough – though aided by a high-strung director’s commentary fed to the audience through headphones – and ends in a fiery explosion of despair. It’s not dissimilar to Chekov’s writing, but the spectacle and contemporary references places the production firmly in the present. It is gleefully nihilistic, surprising and at times utterly baffling. It’s wonderful.

Big ‘isms’ are criticised, with capitalism coming under attack regularly both subtly and obviously. Success, failure and the constant barrage of modern life are also clear features in this descent into unapologetic chaos. A mutual friend who is unseen and idolised is another surprise as the actor/audience boundary is torn down along with the play’s initial narrative conventions.

More profound, perhaps more for the creatives in the audience, is the director’s inability to relinquish control. His commentary gives away his frustrations, limitations and discontent with the actors’ interpretations of the script, and the only way he can cling on to his artistic integrity is to narrate his decisions and criticisms from offstage. His sweeping cuts of the script (which we are also told about through our headphones) and eventual violent acts betray an artist with the inability to trust his creative collaborators to the point that it makes him ill. Though the portrayal is absurdly funny, it’s also quietly poignant.

This is a production that offers an array of interpretations within individual moments, but the overall impression is one of a joyful existentialism. It’s also full of surprises in both content and form that challenges the audience to keep up.