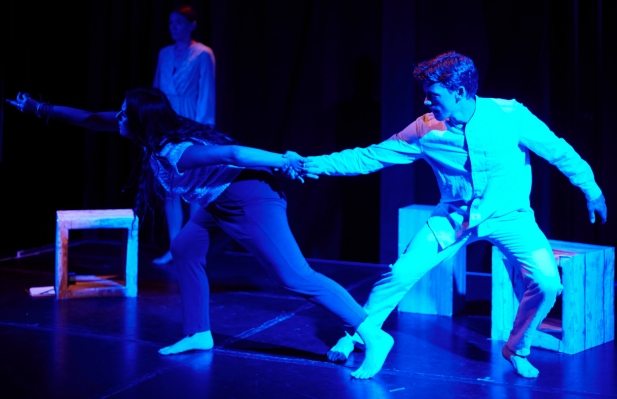 There are many reasons why the classics are still read and performed, with their enduring relevance one of them. Ovid’s Metamorphoses, a narrative poem containing more than 250 different myths, is a wealth of flexible source material that can easily be updated and applied to modern socio-political landscapes. Here, five different myths are updated by five different playwrights to comment on a range of current topics, from #MeToo to the refugee crisis. Ranging in style and quality, the new writing night is largely well-curated and impactful.

Director Kasia Różycki brings European techniques to her classical storytelling, and the distinct writing styles are served by having a singular director. Musical interludes by Olandra and Weronika Bielecka set a melancholy tone with their mournful, singer/songwriter numbers and occasionally provide sonic support to the plays. There are times they are discordant with the tone of individual pieces, but for a collection of works that tackles serious issues their music largely suits.

Bumper Harvest by Christine Roberts is the strongest of the five plays, and ends the evening addressing humanity’s propensity for destroying itself. Meg Lake is a soothing personification of Mors the God of Death, a cool matriarchal figure carrying out her duties marvelling at people’s willingness to help her. Lives of refugees around the world are plucked, like a careless child beheads flowers on a walk through the park without thought. Also, this piece is the only one to use actors of colour – it’s unclear why the rest of the casts are white.

The most clever update is I Fought the State and the State Won by Niall Urquhart, highlighting governmental abuse of power and the stifling of free speech. Vlogger Arachne is an everywoman who achieves fame through her scathing political opinions that make the government feel threatened to the point that the Minister of Communication Michael Pallas challenges her to a duel. Viewing figures define the winner, and odds are stacked against the ordinary citizen. The media pours over every detail, including Arachne’s apparent suicide. It’s an infuriating work drawing attention to citizen’s lack of power and ability to be manipulated.

The entirety feels somewhat uneven due to the range of writing styles and lack of a cohesive theme – Metamorphoses is too broad to bring all of these stories together – but the individual plays pack punch. The use of music goes a long way to unify the evening and give the collection a more polished feel that new writing nights often lack.