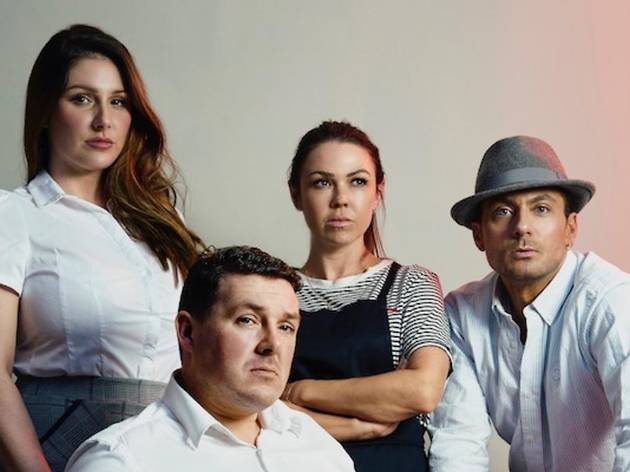 Worth A Flutter written by Michael Head and directed by Jonathan Carr is a simple story of love and its complications that sadly misses the mark. Set in a greasy spoon in Southwark, we see a week in the life of two men and how their affections for one woman changed them forever. While the energy and commitment from all the actors is high, the piece lacks the depth it is trying to convey. Instead, it spends most of its time on odd, offensive and tasteless humour.

Although the cast boasts two well-known soap stars (one of which seemed to be absent from this particular performance), the script simply is not strong enough to keep the show afloat. Long monologues and strange asides take up much of the show and serve no real purpose except cheap laughs.

The plot also feels stretched, and could be minimised to a one-act play, cutting out much of the fluff that fills the show. The characters lack depth, despite the lead character Matt (played by Head himself) spending most of the first act reciting exposition to the audience. In particular, the female characters feel 2D and static – they are classed as the “sexy idiot” or the “cool girl with damaged past” and only appear to be a part of the plot to serve the male characters.

After a long build up to the end of act one, a new male character is introduced and is portrayed as the stereotypical, “loveable, wounded nice guy”. Predictably, he is expected to be liked even though he spends the entirety of act two cheating on his wife. The plot  disappears completely in this act, instead repeating the same timeline as act one, introducing the same types of simplistic characters and jokes.

A rare miss for The Hope Theatre, this show is full of crude humour, poor characterisation, and long winded and predictable monologues that represent a dated style of theatre we have otherwise moved past. Painting women as the main issue in men’s various relationships, Worth A Flutter ends as it begins – on a weak note that, with workshopping and trimming, could be a show worth a lot more than toilet humour and jokes about impotence.

Worth a Flutter runs through 19 May.