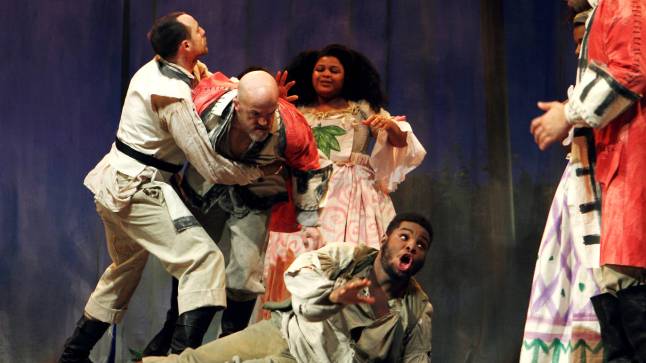 Ramps to the Moon’s Our Country’s Good delivers a production that seamlessly integrates actors with and without disabilities to produce excellent all round performances. Originally written by Timberlake Wertenbaker in 1988, it tells the extraordinary true story of a group of convicts in Australia, who in 1797 with the help of an officer, rehearse and perform a play despite the odds being stacked against them due to strong opposition from the other officers at the settlement.

This production is both a comedy and a powerful drama, combining the use of subtitles and sign language by the actors to tell the story with passion and skill. There are stellar performances aided by the direction of Fiona Buffini and, though it is a lengthy production, the audience’s attention is held throughout, often with outbursts of laughter at Liz Morden’s (Gbemisola Ikumelo) naturally bullish presence.

Filled with consistently raw and truthful performances, this production sends out the indistputable message of the importance of giving those who are disabled an opportunity to share their talents. It results in a splendid evening of theatre.

Our Country’s Good runs through 5 May.