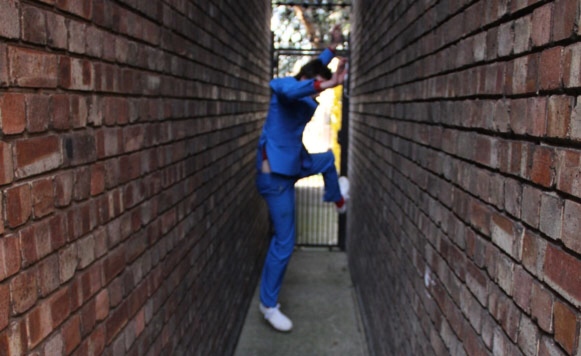 60 Minutes After Feeling Sad asks the question, what do you do when you are feeling incredibly sad?

Joz, who we watch in real time, spends the hour exploring the many ways in which a person can try to cheer themselves up.

Opening the show by watching an incredibly depressing documentary about elderly widows feeling lonely and depressed without their spouses, Joz slams his laptop shut and realises he has unlocked something he did not intend to – a bad thought. Now, how can he get rid of that sadness?

Perhaps he could chat to his flatmate Jess, who he realises after a while isn’t actually home, and in fact has been on holiday for 8 days. Upon this realisation Joz decides to continue chatting to her anyway, so as to try and talk out the feelings of darkness forming around him.

From dancing around to Neil Young, to building a spider web out of string, to inventing a new, not so clever talking phone app, Joz tries everything he can think of, but just can’t seem shake these feelings.

And the more he tries the harder it becomes.

It is impossible to pigeonhole this show but at best can be described as part-theatre, part-stand up, with a sprinkling of social experiment thrown in for good measure.

A brilliant and fresh look at mental health and depression in todays society, 60 Minutes from Feeling Sad subtly explores the acceptance of one’s self, and refuses to apologise in an way for the state of the human mind.